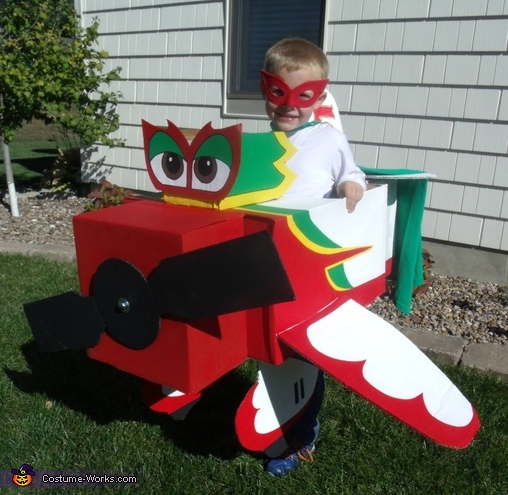 A word from Carrie, the 'El Chupacabra Plane' costume creator:

My son loved the new Disney movie "Planes" when it came out this summer. So naturally, he wanted to dress up like his favorite character from the movie, "El Chupacabra". We decided the best way to make the plane was to use cardboard boxes. We found three boxes that would work for the nose, body and tail of the plane. We then cut the wings, tail fin, propeller and wheels from cardboard. Next, we painted all the parts, then put the plane together using zip-ties and hot glue. We cut a hole for my son to stand in and attached straps so the costume would sit on his shoulders. We made a cape from an old green t-shirt and found a red mask at a craft store. He loves flying around in his costume!