The Family Farm
by Julie-Anne 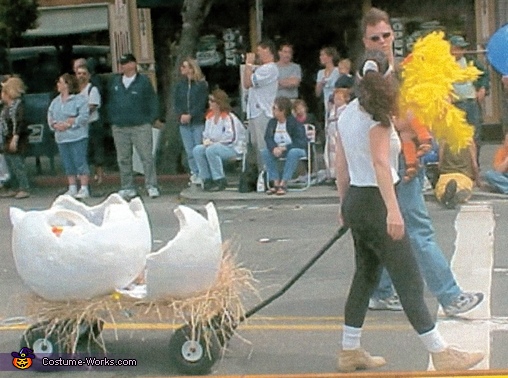 Egg and Chick on "The Butter & Eggs Day Parade"

This homemade costume for kids entered our 2010 Halloween Costume Contest.

A word from Deb, the 'Egg and Chick' costume creator:

Hi there, I saw that you have a costume contest and I LOVE Costume Contests. Here is a costume I made for my boys. It is an egg made from a large party balloon, paper maiched, then plastered to hold a car seat. I cut it open, put the car seat in, put the baby in a yellow bunting I made him. Placed the egg on a WAgon filled with hay. His brother is wearing an all feather costume I made which was like an open bunting that I added a tail, and wings to. Then I covered the entire costume with yellow feathers. Both costumes have a orange foam beak and silly eyes.

I took the pictures myself, I'm the mom Debra. We entered them into "The Cutest Chicks in Town" Contest and we ended up walking in a parade called "The Butter & Eggs Day Parade" in Petaluma CA Like I said I love contests and I can't wait to make many more costumes!!