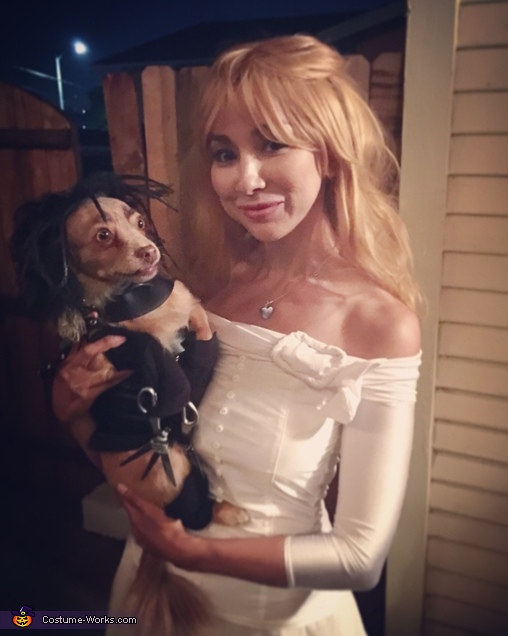 Ever since I started needing a service dog, I knew Halloween would be annoying with people asking me about my dog. So I decided we would always wear duo costumes so people would focus on the costume instead. I had another costume in mind for Halloween this year, but Danny Elfman brought Halloweentown to the Hollywood Bowl this year, so I decided a Tim Burton character was more appropriate.

I repurposed a pair of leather pants to make the base of her costume.
I used a few of my belts, suspenders and some studded leashes I bought from Joann Fabrics to wrap around her.

I bought a punk rock looking dog wig.
I added a few extension clips to the wig to create the lower hanging dangling pieces of Edward's hair.
I bought temporary hair spray paint from Party City to spray it all black.
I used corn syrup and a blow dryer to style it into Edward's shape.
I purchased pet safe paint to make my dog's face look more ghastly like Edward's.
I used white to create the base color. It didn't show up quite strong enough on her blonde fur, so I added corn starch on top.
I used purple to create Edward's purple lips.

I put my smallest black socks on all 4 of her paws and tied flat shoelace ribbon around them to hold them up. I cut open the socks for the back paws for her comfort.
I ordered elementary school scissors online because they were more on the dull side. I broke the blades apart and removed 3 of the handles.
I used hard wire to tie them all together and put the handle through a hole I cut in the sock and wired the scissors to the sock. I left enough space for my dog's paws to not be affected.

The dress was created as an off the shoulder shirt with short sleeves.
We sewed non-functional buttons to the front to match Kim's dress.
We created the bow with fabric and wire to keep the shape.
The bottom half of the dress is made of a fabric used for veils that I purchased on etsy.com
I wore a petticoat underneath to create the bell effect.
I wore vintage white pumps.