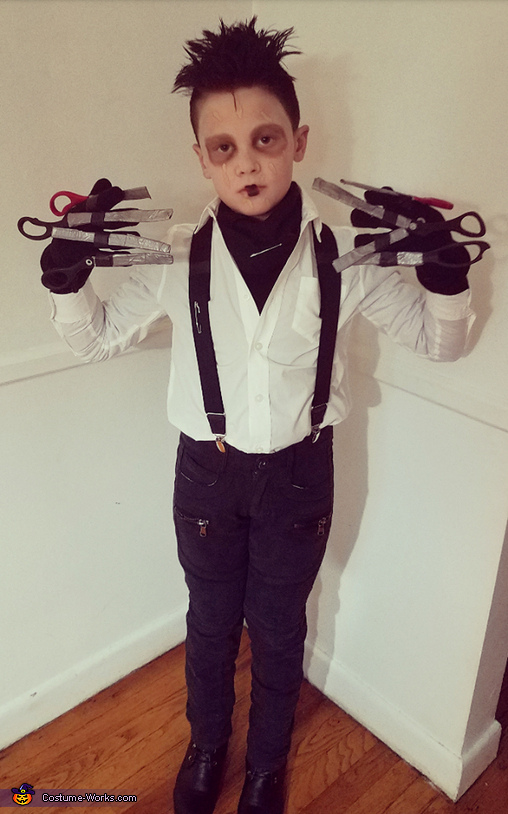 A word from Stacey, the 'Edward Scissorhands' costume creator:

Jacob Scissorhands aka Edward Scissorhands (entered by Mom)
Every year my 3 children have a themed Halloween. This year we waited for the oldest (since she is the fussiest) to decide what she wanted to be. She did not choose until Sunday October 28th. She ended up picking Wednesday Addams therefore I searched 90's movies to find 2 more ideas. My middle went with Bride of Chucky and my 9 year old Edward Scissorhands. On Monday after work I ran to the store and found black jeans with zippers, black gloves, a white button down shirt and men's black suspenders (as there were none in any store for boys). When I went home I made the Men's suspenders fit by using black duck tape and safety pins. I dug thru old clothes in the basement and found a black scarf to make it look like the black turtle neck he wears in the movie. I also found a pair of combat boots my girls used for a hip hop routine. On Tuesday after work I ran to the dollar store and picked up 3 pairs of scissors. When I couldn't break them apart I ran to my brothers house. He helped me take them apart. I then put a plastic knife over it and ducked tape around so that it was no longer sharp and cushioned. Stopped at the party store on my way home and grabbed Black Hair Spray. Wednesday before school my son put on the gloves so I could secure the scissors around his fingers with duct tape.
After school my Son put on his PJ's, followed by a black shirt, black jeans with zippers. I styled his hair with spiking glue and used the hair straightener to spike it up. We sprayed it with hairspray and then went outside to spray the black hair color. I put the lightest foundation we had on his face. I used 3 different color eye shadows around his eyes. Took the darkest liquid foundation I could find and a q-tip to draw scars. put a tad of black lipstick in the middle of his mouth. We than put on his white button down, black suspenders, black scarf & combat boots. I tossed a few safety pins on him and we put on his gloves to finish the look.
My husband, My Son & Myself were shocked at how good it came out. When we went trick or treating EVERYONE knew who he was, which excited him. The best part was when we were trick or treating NONE of his school friends who see him daily knew who he was LOL. The hardest part was getting him to not smile for my picture.