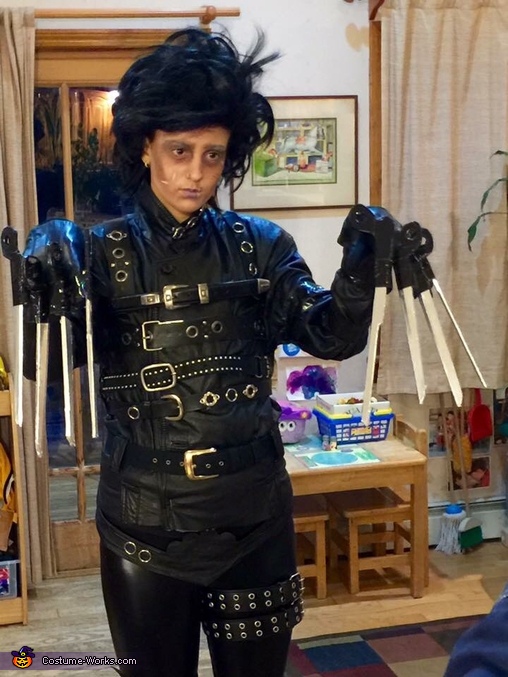 A word from Cassidy, the 'Edward Scissorhands' costume creator:

I made and wore this costume of Edward Scissorhands this year for Halloween at my school (I'm 16 years old). I had been wanting to do this costume for a while but always thought it would be too hard, however this year I decided I was going to go for it! I made the jacket out of a leather trench coat that I got at a thrift store, which I cut at the waist, then cut in the back and sewed to make it fit me. I then got various black belts from the same thrift store, and also gathered some that I already owned. To attach them I cut holes it the arms of the jacket and strung two of them through, then for the others I either taped them or glued them. Then, for the belts that didn't have metallic pieces I dissembled a metal ringed belt and glued the individual rings onto them. Then for the neck of the jacket I turned up the collar and used Velcro to keep it together, plus I also glued metal rings onto it. For the arms, to make them less baggy, I put duct tape around them in certain places. The belt/harness looking deal below my jacket (which I attached with Velcro) was created using the left over leather belt that had originally belonged to the trench coat, along with some leather from the bottom half I had cut off, plus metal rings that I glued on. I then velcroed two small belts around my thigh on my faux leather leggings, and created a sort of 'leather wrap' that I made with more left over leather and metal rings, and that I velcroed/duct taped around my knee. For my shoes I wore one leather boot which I duct tape to my leggings so it would appear to be one piece, and one shorter black riding boot that I've had since forever. The last part of my clothing costume was the scissor-hand. These were made with shiny metallic duct tape, black duct tape, cardboard, and a pair of leather gloves by a co-worker of my dad who was willing to help make these for me! The last part of my costume was the wig, that I purchased off amazon, and the face/makeup which I created. For this I watched a tutorial online and did all myself. I used different makeup, including face paint, foundation, eyeshadow, and different obscure things to pull it together! The scars were done with thick white face paint applied with the handle of a thin paint brush. I was incredibly proud of my costume and of all the hours of work that paid off in the end. It was a total blast to wear this to school- and to drivers-Ed at 7:00 in the morning. It was great to see reactions, and my teacher called me Eddie! :) However, the hands were a bit of an occupational hazard during the school day- a little hard to carry my books around and do school work with, in which I unfortunately had to take them off, haha. But nonetheless, it was my favorite Halloween thus far, and my most prided creation/costume to date. I have one problem: how to top it next year, my senior year!