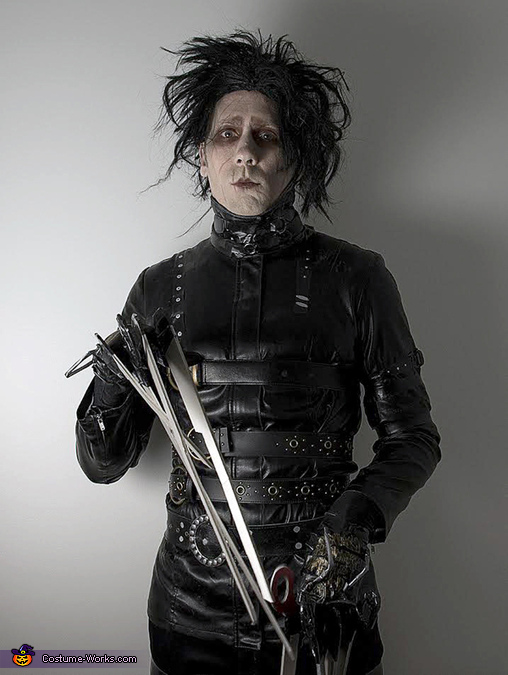 A word from Zach, the 'Edward Scissorhands' costume creator:

Edward Scissorhands has always been my favorite love story. I LOVE Tim Burton and all of his films . His movies contain some of the most interesting and visually stunning characters ever created. I had always wanted to be Edward for Halloween but ONLY if I could do it right. I didn't want to cut any corners or "cheapen" his creation by half-assing it. Being Edward for the day was amazing!

I made this costume by taking more than a dozen trips to local second hand thrift stores. I had to find JUST the right materials and sizes that would fit me. Black leather jacket, pants, and belts... LOTS of belts. I have a 1/16 inch model replica of Edward from the film that I would take with me to the stores. I wouldn't purchase anything unless it fit just right and looked just right.

The first major find was the jacket. It was perfect! Just the right fit. Nice and tight. It was a woman's jacket and the sleeves were a bit short so I had to adjust them and let them down a bit.

Next was the pants. Also woman's but they fit perfectly. They weren't the same leather material as the jacket, however, so I purchased a plus size black leather skirt and cut pieces of leather out of the skirt to apply to the pants. For the sections that were missing or had different textures, I used some black duct tape to create the difference in texture.

I purchased 20 belts and then begin taping and gluing them onto the pants and jacket, again, using the model for a reference to make sure they all looked correct and went in the right places.

Once the belts were on, I used metallic paint and tiny metal studs to paint on or glue on the numerous little metal accents.

Then the gloves. The scissorhands themselves. I started with black women's gloves that went with a gown or ballroom dress. Using the figure again, I looked at each blade individually and created a template. Once I had the sizes right, I printed them out and traced them onto foamcore. With an exacto blade, I carefully cut out each blade then spray painted them with a metallic silver finish. I used black electrical tape to tape each scissor piece onto the right fingers. Once they were in place I made sure they were secure and then added the details with the metallic paints and duct tape.

Other items that I used for this costume were a black witches wig that I cut unevenly and then ratted using a LOT of hair spray and hair gel. Make up for the pale face, dark eyes and scars. Black shoes that I also affixed black tape and leather to and drew metallic features on them as well.

The reactions that I got when wearing this costume were what made it all worthwhile. I had complete strangers coming up to me and asking if they could take their picture with me. I wore my costume to work and just about everyone there wanted a picture. They all just stared and said how creepy I looked. Co-worker's kids came in to trick or treat and none of them wanted to come near me. They just stood and stared even though I said I was a nice guy.

I started making this costume in August and overall put more than 60 hours into it. The extreme attention to detail is what I believe sets my Edward Scissorhands costume apart from the rest. The real leather and vinyl features look great up close and in person and made this one of the HOTTEST things I have ever worn! I started getting hot around 10:30 in the morning and didn't take it off until late into the day.

I'm very proud of this creation and would consider it a great honor if I were selected as a winner.
Thanks for holding such a fun contest! HAPPY HALLOWEEN!!!