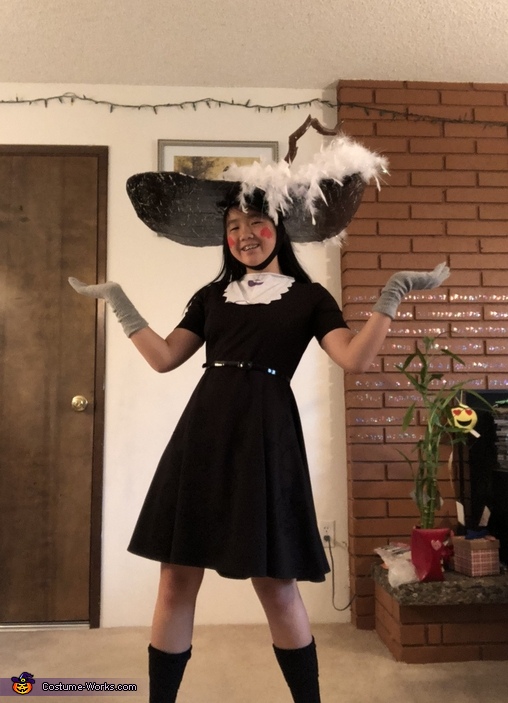 A word from Katherine, the 'Eclipsa Butterfly' costume creator:

I, Katherine, is wearing the costume. I got my idea from my favorite TV show, Star vs. the Forces of Evil. I heard there was a new character in the new season, so I binged watched the season. Then, as I saw her, I knew I wanted to be her for this coming Halloween. Her costume consists of a big hat, a black dress, and long socks and gloves (pretty simple, I know) but the tiny details of everything make the costume. I made the hat entirely out of cutting cardboard, paper mache, and glue and added the feather boa. I cut everything out o cardboard and paper mached the “hat” part to make it look smoother, then cut out a “bib” shape and taped it onto he dress to cover the deep v-neck it came with. Next I bought the long socks and gloves and paired it with the costume. The reactions I got from the costume were to be expected, obvious strange looks and insults were said like “what the heck are you wearing?!” And “that’s the stupidest thing ever,” but the compliments I got greatly outweigh the insults. Everyone from my art class was like “wow!” And “I wish I had the dedication to do that!” While I was trick or treating, a nice lady said “oh my gosh did you make that?! Are you in high school?” And I responded by “no! I’m in 6th grade!” And that made my night. And that’s it! That’s my costume!