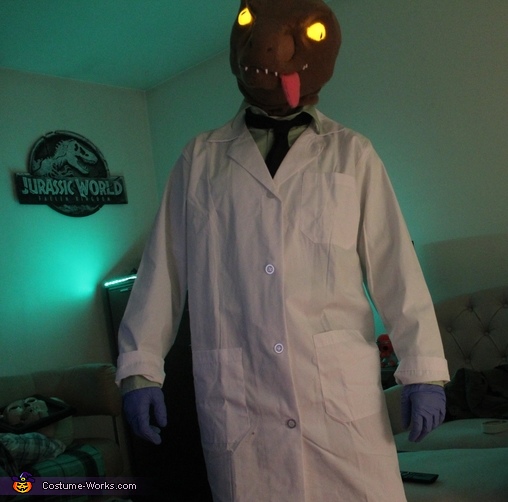 A word from Lillian, the 'Dr.Dinosaur' costume creator:

The costume is a character named Dr.Dinosaur from a comic called "Atomic Robo". I've been a fan of the series since 2017, Dr.Dinosaur got me into it in the first place, which eventually led me to start the creation of this costume years later. I actually started creating this costume sometime in February. First, I bought a foam headbase from a costume sight called DreamVisionCreations and hollowed it out. Once it was hollowed out, the back of the base was built up with foam to make the back of the head seem more natural. Ping pong balls were used for the eyes; a simple sharpie marker was used to draw the pupils on them. Small holes were cut into the back of the ping pong balls to insert the orange LEDS into them. They were secured into place using hot glue. The LEDS were purchased from 1michiganger. The teeth were inserted by cutting holes into the lip-area of the base and hot-gluing them down. The teeth were purchased from RedNebulaCosplay. To make the mouth seem a bit more natural, pink fleece was glued down into it. Light mesh that was painted to look brown was placed into the sides of the face to allow vision, while black mesh was put into the nostrils. To add the more massive bits of brown fleece to the mask, the head was covered in plastic wrap. Duck tape was then added on top of the plastic wrap to create somewhat of a cast around the mask. A sharpie was used to mark what areas of the mask the duck tape scraps were meant to represent. After everything was marked out, the duck tapes were cut into sections. The shapes of the sections were traced out onto the back of some brown fleece fabric. Once all the sections on the fabric were cut, they were pinned to the mask to make sure everything fit properly before sewing. Once everything was in place, he fabrics were glued down with hot glue, then sewed together using ladder stitching to give it a somewhat seamless look. Brown Upholstery thread was used for the mask. The pink fleece fabric was purchased from BigZFabrics, while the brown fleece was purchased from Fabulessfabrics. The tail was made by drawing a design onto a roll of paper. This design was cut out, then traced out twice onto the back of some brown fleece fabric. A small circle was cut out as well to serve as the base for the tail. Both sides of the tail were sewn together, then sewn to the tail base. The tail was stuffed through a small gap in the thread before it was secured. A small elastic band was sewn to the base of the tail, (the tail is worn by using this elastic band to attach it to a belt). The same method used for the tail was used for the tongue as well, except without stuffing and with pink fleece instead of brown fleece. Pink polyester thread was used to sew the sides together. A quarter was put into the tongue before the stiches were finished up to give the tongue weight. The top middle portion of the tongue was given small stiches to add a bit of realism to it. A simple lab coat was purchased, a hole was cut into the back of it to allow the tail to show through. The rest of the clothing was just clothing that I had lying around already. The exact cost of costume production couldn't be determined, but it was likely somewhere around $150+. I am the one wearing the costume in all images provided.