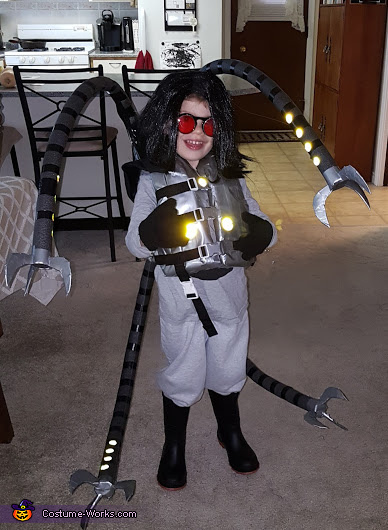 A word from Dedrie, the 'Doc Ock from Ultimate Spider-Man' costume creator:

My son, Riley, was very specific about which Doc Ock he wanted to be. He also insisted that his tentacles move. So the costume is a repurposed life jacket, pipe insulator, fishing line (for the moving tentacles), some LED lights, plus a whole lot of duct tape, electrical tape, wire, plastic struts, lead plates... there's even some Lego in the frame to help the fishing line avoid getting caught. It was an extensive build and he's four so of course as soon as he was done it was dropped on the floor and trampled, but that's what we do as parents, isn't it... so it goes.