Rapunzel and Flynn Rider
by Lindsey

Rapunzel and Flynn Rider
by Natalie 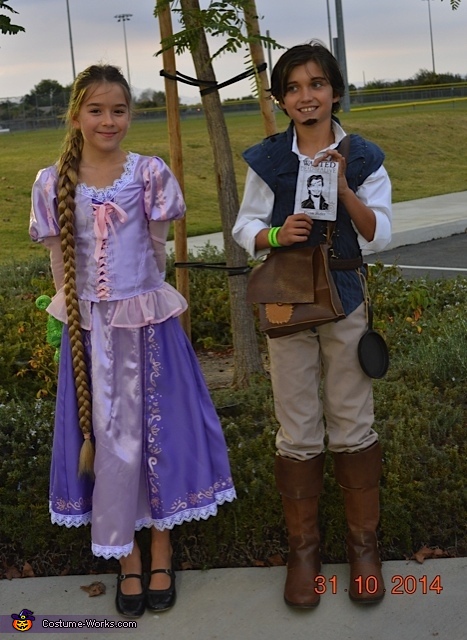 A word from Kendall, the 'Disney's Tangled Rapunzel and Flynn Rider' costume creator:

Hello Costume Works , my name is Kendall Veronick and I am 15 years old. This is only one of the four costumes I made this year. I made a Flynn Rider costume for my little brother for two reasons: 1. He looks a lot like him and 2. His little girlfriend has really long hair, down to her waist. We thought it would be cute to have them go in a couple costume, I didn’t make the girlfriends costume but fortunately her mother also made costumes. They looked adorable, it amazed me this year just like last year my brother suit the costume PERFECTLY! He made me say he looks really cute and he looks a lot like him, I don’t think my little brothers that cute but that’s probably just a sister thing. The funny thing is his costume was the easiest to make and took the littlest amount of time.

This costume overall was a lot of fun to make. Making the satchel and the belt bag was a lot of fun for me because it was a change; I had been doing so much sewing I needed to change it up. I had fun crafting the little bags and coming up with the idea on how to do it; even finding the right pair of pants and the right shirt to use went smoothly. Finding the right accessories to use was also no problem, the only thing was that by the time I got to his vest I was tired from the whole process of sewing… after three costumes I just didn’t want to do any more so when I got to the vest I did it very fast and was just in a hurry to finally seeing the light at the end of the tunnel. Making the vest wasn’t hard but it was tedious, all the buckles and the extra pieces added more work! But it was done and it felt good looking at all the fruits of my labor.

People’s reactions to this costume were, that it was perfect, that he looked and played the part perfectly. My little brothers an actor and he loved the role he played especially with having his little girlfriend Rapunzel on his arm. The best part about making this costume was, no matter how annoying it was, seeing my brother do the “smolder” showed me how much he liked it and that was comforting to me.

This costume was fairly easy, we used a lot of things we either already had or bought stuff from thrift shops. His pants we coincidentally already had, we bought his white button up shirt at a thrift shop and I sewed the color down so it wasn’t too tall and it had the right look. I did sew the vest, I used a fabric I had gotten for my other costume and I made the pattern for this vest because as you have seen my little brothers a twig and I didn’t want to look for a pattern. Patterns aren’t hard to make and they work just as well as store bought ones, I usually use paper bags cut out in the right shape so it’s not to flimsy. I cut out the vest pieces and sewed them all together, after that I added the buckles and the belt loops; for the belt buckles I got all brass buckles and (without the bar in the middle) I bent off the prong, engineering it too stay attached to one side of the vest like a hook, attaching the buckle to the other side. Finally I added the jewel accessories.

Next are the boots and accessories. I made the satchel and the belt bag with leather and used leather glue to hold them together; I made my own patterns for the satchel and the belt bag, then I sewed on the additional buttons and patches with a leather material. We used a belt we already had which is perfect for costumes like this. Lastly for the boots, I own a pair of boots that are knee high and luckily my boots fit my little brother. we folded down the boots as far as we needed and I cut out pieces of leather for around the ankles and the flap that hangs over, this made the boots looks less girly and a little more rugged; for the flap I used elastic and for the ankles I used the same jewels that I used on the vest.

I don’t do hair and makeup that’s my moms and sisters job, in this case though my mom did his hair and makeup. My little brother doesn’t originally have this color hair so we used a black hair rinse and darkened his eyebrows. Lastly the sideburns and beard, we bought the sideburns and beard but we didn’t like the beard; so my mom put eye liner on his chin then put glue over the top using pieces of the hair from the beard.

Thanks for your consideration!

Sewing this Disney Rapunzel costume was my first attempt at sewing something on a machine. I used a lavender purple matte polyester fabric for the body of the skirt, with a satin panel in the front. the skirt was trimmed with pink edging, that was sewn on by hand, and the entire bottom was trimmed in crocheted lace. To finish off the skirt and make it as authentic as possible, i hand painted the pattern around the bottom and front of the skirt to match the pattern that was on Rapunzel’s skirt in the movie. I used a pale lavender satin for the bodice. The arms were made with puffed satin sleeves, with pink ribbons sewn on for detail, and sheer pink trimmed in lace. The bodice was laced up with pink satin ribbon and trimmed in crocheted lace as well.

I learned a lot during the process, including how important it is to have an iron to keep seams neat and that satin is a horrible medium to work with…it frays into fluff at the edges with the slightest touch, and it is stretchy in one direction and not the other, so if you are not careful to sew all pieces with the grain of the fabric going the same way, you get a crumpled lumpy seam that has to be completely re-sewn. I learned that eyelets must be hammered in with just the right amount of pressure or they will slice right through the fabric, thank God there are extras in the package and the directions suggest testing them on scraps first! I learned that i paint so much better than i sew, and had a great time painting the flower details on the skirt, and adding lavender rhinestones! I also learned that 9 year old girls don’t stand very still when you are trying to pin stuff on them! The part of the costume that i thought would be the hardest (the hair) turned out to be the easiest. I attached 3 dollars worth of synthetic weave hair to my daughters already waist-length locks, with a few hair-ties and braided it in for a perfect match. I think this costume turned out extremely well for my first try, and i’m very proud of it! All the things i learned will make my next costume turn out even better!