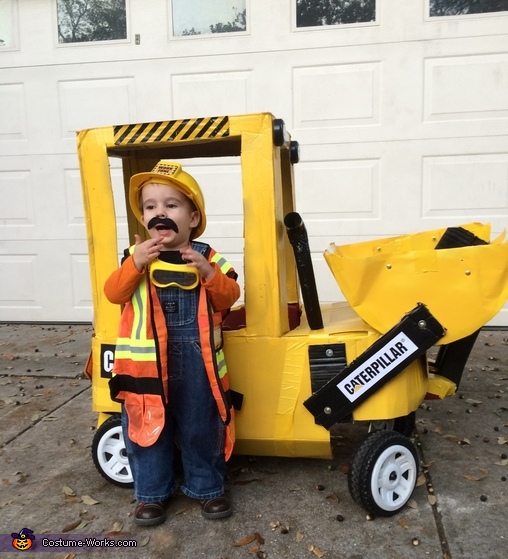 A word from Robi, the 'Digger Man' costume creator:

My son, Robi, wanted to be a Digger Man for Halloween this year after his love for a book with that title (by Andrea Zimmerman & David Clemesha). After searching Pinterest, the only costumes I could find that came close were those where the kids wore the boxes. However, I quickly realized that my 2-year-old would last 5 minutes wearing it as it was too bulky. Thus, using the same concept as those I saw on Pinterest, I took several boxes, spray painted, wrapped and duct taped (yellow duct tape) them to a plastic wagon we had. The most difficult part was the bucket of the digger, which I created out of flexible poster board but then had to reinforce it with cardboard boxes. We used the handle of the wagon to support the digger's bucket and then devised arms to attach the bucket to the body of the digger. We had to use two "arms" on each side and connect them together with Chicago screws in order to allow give to lift and pull the handle. The finishing touches were tap lights for headlights, fish eye reflectors on the rear and other reflector stickers. I printed CAT logos on a color printer and just cut them out and used double-sided tape to adhere. Additionally, we made the exhaust pipe by duct taping an empty toilet paper role with an empty paper tower role (and spray painting it black). All in all it probably cost around $40 (not including the wagon or his clothes) for supplies on Amazon, where I did most of my purchasing...including obtaining most of the boxes.