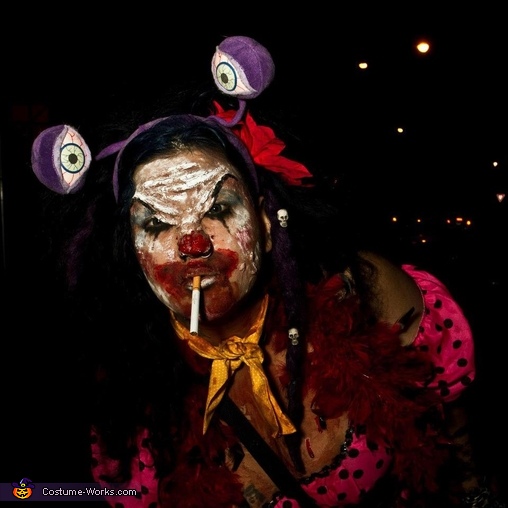 A word from Michelle, the 'Demonic Clown' costume creator:

Soooo, I wish the picture quality was better on my demon face, but these 3 pictures are from the past 3 Halloweens. All of the make up was done by me, on a budget. I don't know what my chances of winning are since none of them are full costumes. The demon face was from this year, and I did it with flour, water, glue sticks, spirit gum and latex from the Halloween store. I also used fake blood instead of a red make up to give it a shiny appearance through the duration of the evening, the only other color that I used was a little bit of black make up to give it depth.

There is also one of me with a 45 record "stuck" in my face, the theme was that Rock and Roll becomes you. The make up on that was predominately glue stick, non toxic artists paint, fake blood, and toilet paper.

The final photo is of me as a demonic clown, and I used the same method as I did for the red demon face. The pink dress with the black polka dots was initially a thrift store costume that I wear regularly.

Again, I don't know if there's a chance that I can still win since it's primarily all make up jobs instead of full costuming. I'm entering because it's entirely possible to do horror make up on a tight budget and I'm more then happy to let people know that. :)