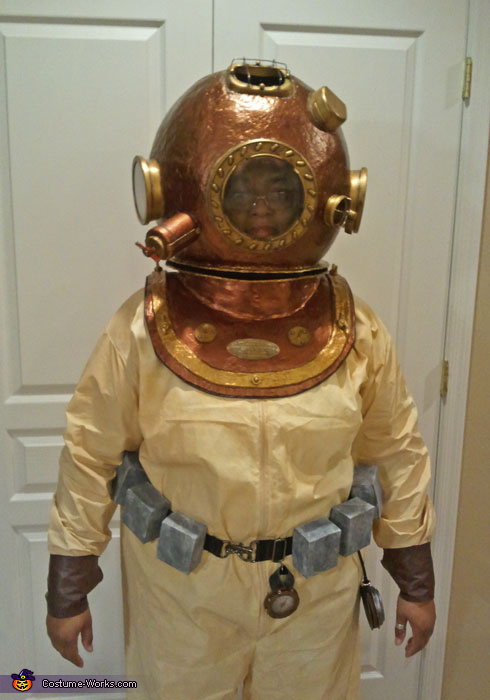 Diving in front of the pantry

A word from Nina, the 'Deep Sea Diver' costume creator:

So in the pictures I'm wearing the costume that I started on in late August 2012. Mostly made from things found around the house I was able to complete this costume for about $60.00. The suit was a white painters suit that was painted tan. My shoes were covered with white fabric that was stained with Tea and dried, kept in place with gold thumbtacks. The weights on my shoes were cardboard painted silver and then aged. The weights on my waist are Jiffy cardboard boxes cut in half, cardboard on the cut ends, sanded and painted and holding on with velcro to a luggage strap that I made into a belt.

I started making the helmet with a punch balloon that I blew up and covered with saran wrap, mod poge newspaper and layered it on once, then covered that with plaster strips. I then covered everything in plaster of paris but that soon began to crack and chip off. I gently chipped off the plaster and instead used instant paper mache which is like paper pulp which you can mold and it will hold its shape. I then primed and painted it, with accessories added on later. I liked it because it had a nice hammered effect.

The front port window was a clear embossed candy lid. The side windows were sour cream containers and their lids, the "glass" in them was CD lids cut to fit inside. The transceiver recess on top was a Lunchable compartment container. The regulating escape was a candy spinkle container with a screw and the knob was constructed out of cardboard and painted red. The pipes on the back were cardboard.

The breastplate was made in much the same way though entirely out of cardboard for the base. I used actual wingnuts and hexnuts for the breastplate, printed out a makers plate image and used round wood and cuts golf tees for the eyelets.

I am not a professional. This was the first costume I have ever made that I didn't sew. I had soooo many compliments and "you're going to win" comments and pictures taken (this was for a casino contest). Even though I didn't win anything I had a blast and this has inspired me to try and outdo my costume efforts next year. These photos were taken with a camera phone.