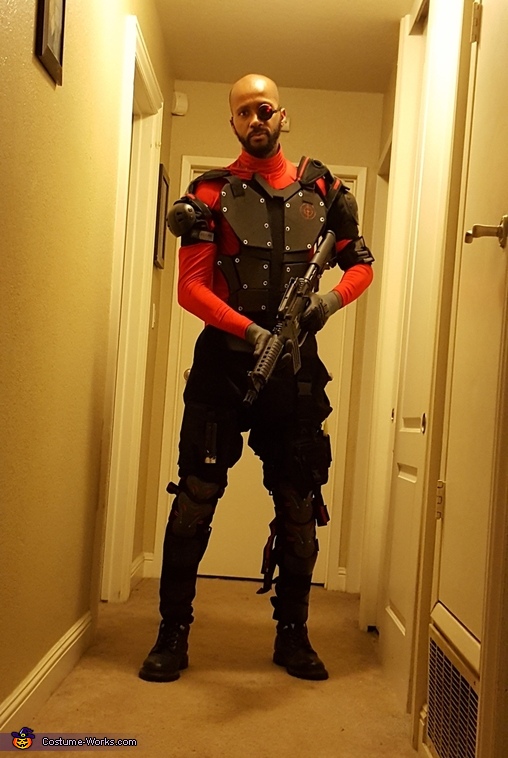 A word from Aaron, the 'DeadShot' costume creator:

My idea for my costume, came late into the Halloween season. I had seen the trailor for Suicide Squad, and being that Will Smith is an actor, which i am constantly said to favor, I continued to grow out my beard until Halloween. Funds was not agreeing with the budget for an order to become deadshot, so I looked to creative means. The chest plate, is of foam mats that I sketched, cut out the many pieaces. then I bought a bag of glue sticks, and heated up the glue gun. The straps, i looked to old backpacks, work aprons, basically anything that i could use. I then went to the local goodwill, and found several knee pads, and an ipod arm band. The red compression shirt, was a pain to find, because no one has the realistic one, so, i found i decent one at Big5. The shirt didnt come with a collar lip, for the wording, which is to read "I AM THE LIGHT, THE WAY". SO I found an old red T-shirt, cut the sleave off, and sewed it to the compression hirt, and wrote the wording in. Oh! my favorite is the eyepiece. it took me a whole week, just to figure out how to put it off, being that Will Smith has a unique eye piece that has a red light. The day before Halloween, i searched the entire house. The front of the eye piece, is the top plate of a sprinkler nozzle. the inside glass, is the lense of
3D glasses (which i cut to fit). The red light is a finger ring light which i smashed to get the light out, and electrical tapped it to the inside. Next i found this wierd flimsy,but bendable wire, to form fit, around my head, to rest on the other ear. Nearly giving up in developing the costume, I pressed on. I posted sample shots of the costume to my facebook, and the feedback was amazing. after having it on, I kind of wouldnt mind being Will's stunt double..lol
People say that i pulled it off without having the Deadshot mask.