Dark Angel Coming from the Clouds
by Marcela

The Dark Angel
by Stacie 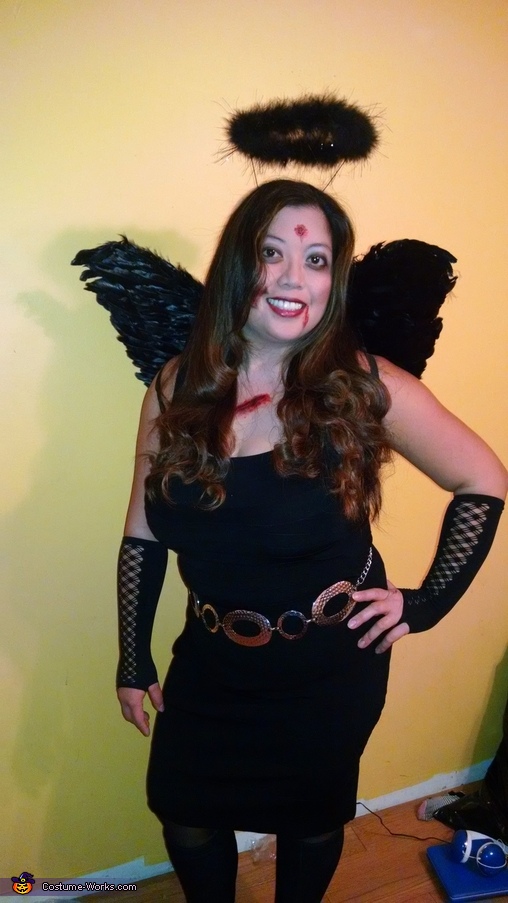 A word from Michelle, the 'Dark Angel Zombie' costume creator:

My name is Michelle and I'm wearing dark angel zombie coatume which I created. I love zombie movies and shows so on Halloween I do combo of my costumes just to add some fun to it.
When I went shopping, dark angel costume was little pricey then I thought i already have the following: black dress, stockings and boots. So the things I bought was: the halo and wings, gauntlet arm warmers,and zombie makeup kit all for less than $20.00 at Walmart. Gauntlet arm warmers for were for another costume or maybe universal costume. So I figured I add it to mine since its black and it will keep my arms warm.
So the boots , stockings, my cocktail dress and my silver belt to add little contrast are all which I already have. Then powdered my face with white makeup, black makeup under the eyes and bit on the cheekbone. The gun shot, the bite on my face and the scratch on my chest are all tattoos which I then added blood makeup to it as well on the side of my lips. and dark red lipstick. Then the finishing touch were the halo and wings and curled my hair a bit on the bottom.
I got so many compliments at the Halloween party I went to esp. The gun shot on my head. There were bunch of white angels there but I was the only dark angel there which was cool. 😁.
Last yr I did top gun and zombie but added a flesh on my arm instead of arm warmers. So i try to be creative as well as being on the budget.
So that's my costume. Thank you for your time.