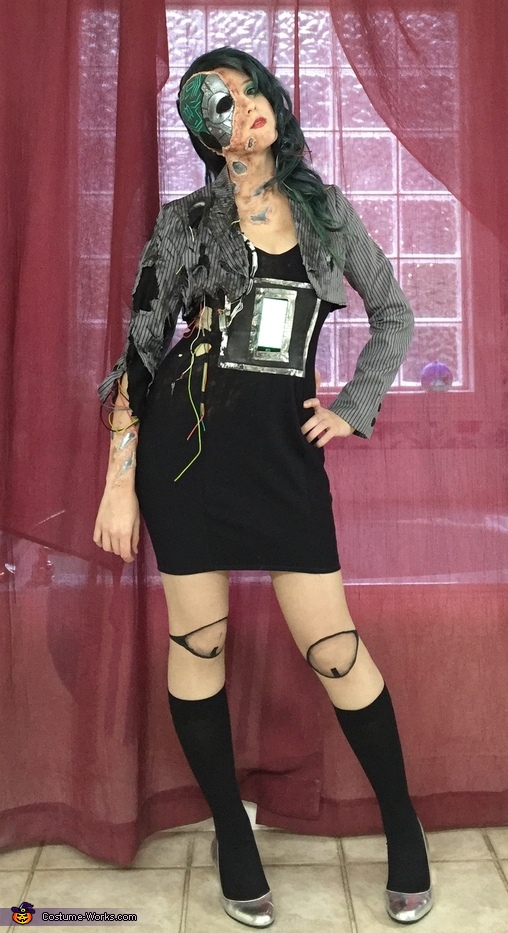 A word from Ann, the 'Damaged Android' costume creator:

I almost always create costumes after video game and cartoon characters, so I thought that this year, I’d really like to do something original. And since I’ve had robots on the brain lately, I thought, let’s be a robot!

This costume closely resembles a character I created together with some friends for an animated short. I’ve always really liked the idea of an android with her external prosthetics ripped up, maybe after some kind of fight or doomsday situation, especially in a way that sort of resembles that cool half-shaved hairstyle that’s been popular lately. It’s a “less-is-more” look that gives you just enough information to suggest something crazy going on underneath the surface, and to wonder what this character’s story might be.

I’ve also always wanted to make a costume that I could somehow incorporate an animation into. A robot seemed like the perfect opportunity!

To create the effect, I started by buying a cheap bald cap to cover up my real hair, and used a latex/acrylic blend to paint the circuit board pattern onto it. The “exposed” part of the face is a prosthetic made from layers of latex, fabric, loose cotton, and metallic pigment, as well as a thin layer of black mesh to block out the eye. The other ripped/exposed areas were made from the same materials.

I had a few old, damaged wigs in my closet, so I cut, dyed, re-styled, and stitched a couple of them together to create the hair effect. It attaches to the bald cap along the “torn skin” line with pros-aide.

The jacket was an old blazer that I cropped and ripped. Acrylic paint for the burnt discoloration effect, and a combination of leather cords and real scrap wires were attached with hot glue. The dress was sewn from scratch with a special pocket to hold an old iPhone, which looped a video that I animated (it’s a heavily distorted “intro screen” for a Siri-type secretary character). I also painted a ball-joint effect around the knees on an old pair of stockings.

For a little extra robotic effect in the dark, I stitched some green LEDs into the jacket and the wig.

Most of my materials were “around the house” stuff, but the bald cap, liquid latex, fabric and extra makeup came out to around $30.

And for a closer look at the video on the dress, you can watch it here: https://flic.kr/p/AmqDbU