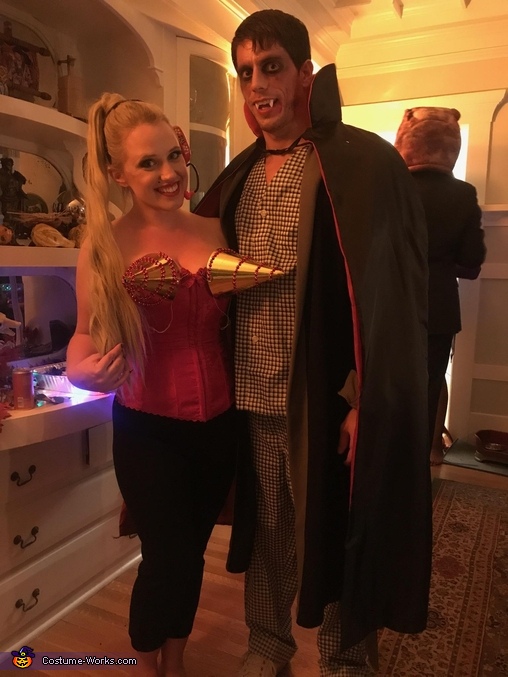 A word from Eric, the 'DADcula and Madonna from Hocus Pocus' costume creator:

Year after year, I'm always in search of a costume idea that is incredibly subtle and as close to screen-accurate as possible, while spending very little money. One where only the biggest of fan will recognize it upon initial viewing, because, in my mind, it makes it that much more special when they do.

And as a lifetime fan of Hocus Pocus, a movie I've watched every October since it's release in 1993, I've toyed with the idea of attempting the DADcula and Madonna costumes Max's parents wear to the town hall party. But it wasn't until I started dating my girlfriend, who is as big a fan as I am, that I truly gave it thoughtful consideration. When I pitched her the idea, she was immediately on-board, and we set out to achieve what you see in our picture.

• Black bathrobe (already owned)
• Light blue w/ pattern, two-piece pajamas (already owned)
• Dracula cape (constructed by girlfriend, who is a skilled manufacturer of her own cosplay costumes, using available fabric she had leftover from a cape she's been sewing for her friend's wedding dress). Labor-time was approximately 1 week.
• Self-molded vampire fangs (purchased via Amazon $6)
• Mouth-blood created with a kiss via girlfriend's red lipstick