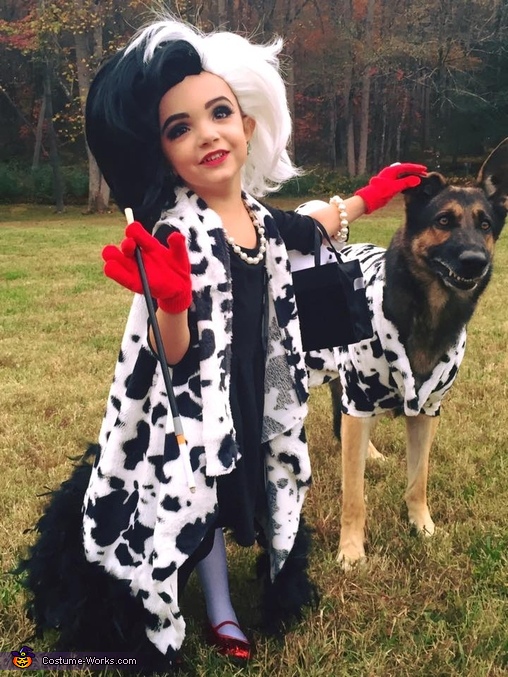 A word from Victoria, the 'Cruella de Vil and her Terrified Dalmatian' costume creator:

My four year old daughter loves the Disney movie 101 Dalmatians, her favorite villain is Cruella de Vil. So, that's who she insisted she be for Halloween this year. The materials we used for her costume were Dalmatian fur fabric that I purchased at our local fabric store in Hickory North Carolina. Her Cruella wig was purchased on eBay, her black dress was purchased from our local Wal-Mart in the area as well as her red sparkly shoes, red gloves and black and white tights. The cigarette holder, fake cigarette were purchased from Party City. I made her jacket and trimmed the bottom with two rows of black feather boa. Since we don't have a Dalmatian dog we turned out German Shepard into a "Dalmatian" I made his costume out of leftover fabric from Cruella's jacket and attached velcro down the sides to keep it on him he really played the part of a terrified Dalmatian! Cruella played the part and was a hit around town saying the quote from the movie, "Anita, Darlinnnnng!"