Coraline and the Other Mother
by April

Coraline and The Other Mother
by Jody 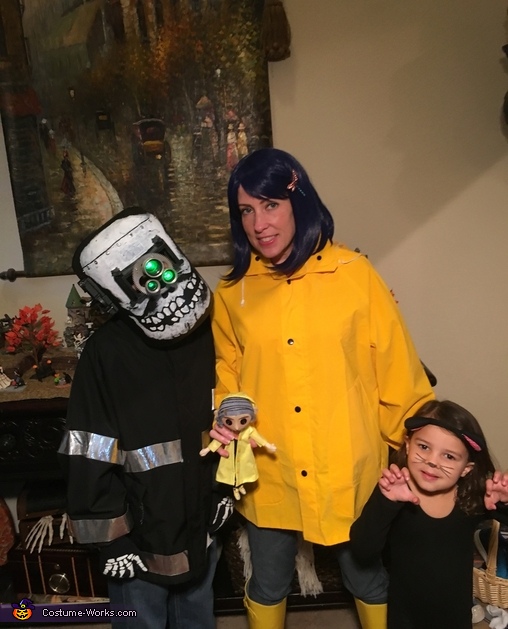 A word from Kristy, the 'Coraline' costume creator:

Our entire family loves the movie “Coraline” so this was so much fun to create! My 10-year-old son, Jameson, is dressed as Wybie. I hand painted the skull on a black welders helmet. We removed a turret lens from an old camera and mounted it on the helmet. We added green LED lights and mounted a crank on the side. The jacket is a black raincoat with duct tape for reflective stripes. I am dressed as Coraline. This was very simple. I found a blue wig and dragonfly pin. I painted the dragonfly to match Coraline’s and turned it into a hair clip. I found an orange striped sweater at a thrift shop. I wore that with jeans, a yellow raincoat, and yellow rain boots. My three-year-old daughter is the “Feral” black cat from Coraline. She is in a simple black leotard, black tights, fur boots, black cat ears, and tail. I then painted a black nose and whiskers. The best part is all 3 costumes were created for under $100!