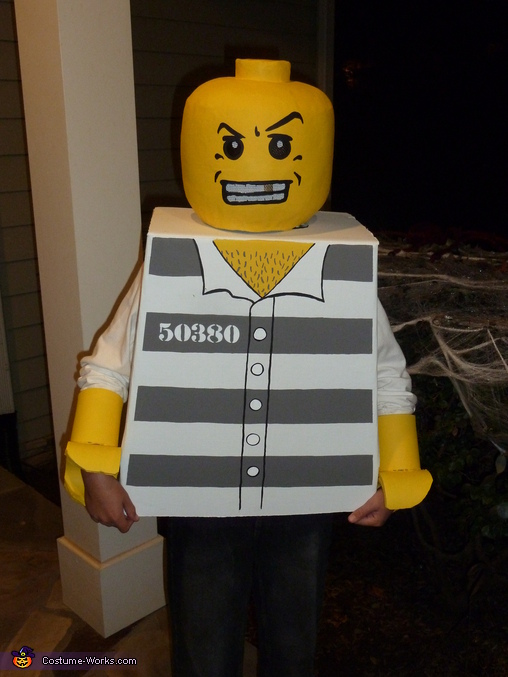 A lot of other great Lego costume ideas can be found here.

A word from Bonnie, the 'Convict Lego' costume creator:

My 9 year-old son, Kevin is wearing this Lego mini-figure costume. I love the creative challenge of Halloween and decided to take on his request to be a Lego man. I decided to paper mache the head. We started with ordering an inflatable Socker Bopper off Ebay as that was the head shape that I wanted. A lot of how-to sites have people making the head out of carved foam but I decided to attempt the paper mache instead. Once the head was dry, I covered it with light coat of wall spackle then sanded for smoothness. After I used a Dremel to cut out the eyes and mouth it was ready for paint. We covered the eye/mouth openings with a piece of screen which could also be painted. His body is folded cardboard painted with the Lego man graphics. I used foam can cozies to make the distinct Lego-man hands. Unfortunately it rained on Halloween and the Lego-man had to wear a clear poncho to stay dry!