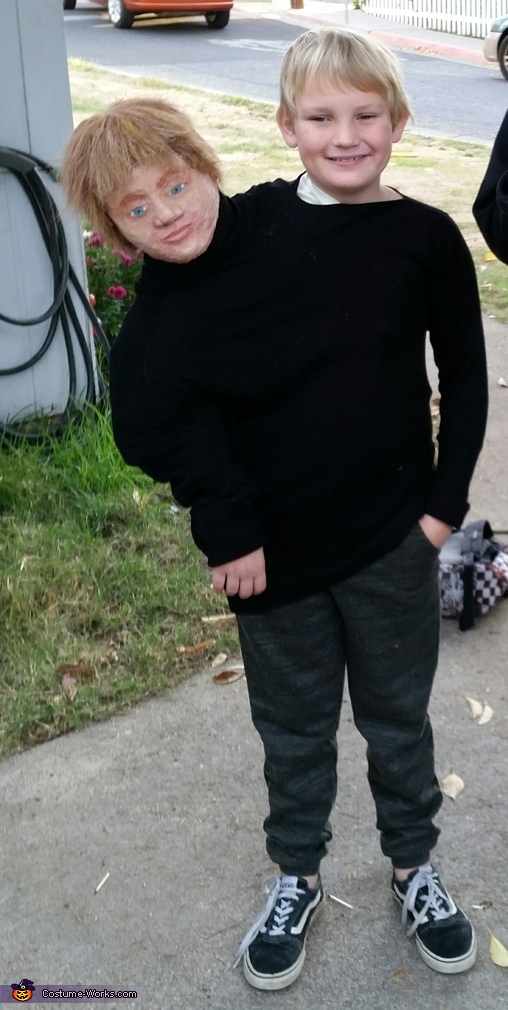 A word from Melissa, the 'Conjoined Twin' costume creator:

This is my 9 year old son Cyrus and his conjoined twin. We were dressed up as a family this year (2018), as always, and the theme was "Circus Side Show Freaks".

We all thought his costume was the best, so we decided to enter it into the contest. He won best costume in his class at school, plus he got twice as much candy when we trick or treated!

I made the twin for his costume...it took a while too. I used a papermache style tecinque with strips of material in a water, flour, plaster of Paris mix. Cyrus layed on a table while I made the mask on his face, then sped up the drying process with a hairdryer. After I had the face hardened, I did the back of his head with the same technique, then adhered the two pieces together using more material and the paste mix. Same with the shoulders, although I attached the head to them with hot glue as well. This process took weeks to complete since it had to sit and dry out so many times.
Once the three dimensional bust was complete, I began painting it. Lots of layers of colors to get the skin tone close. The hair was from a strip of craft fur I cut into pieces and glued on. It wasn't easy getting the part right, and the fur to all go the same direction his hair goes, but it turned out alright.
Finally, I cut an extra hole out of a black sweater, and that basically kept the bust in place on his shoulder when he wore it.
That's about it! Happy Halloween!
Melissa