Colonel Sanders and his Chick
by Lisa 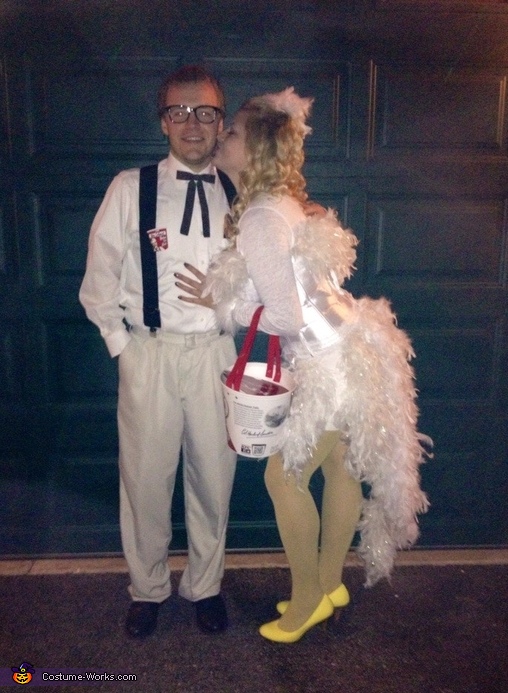 Colonel Sanders gets a peck on the cheek

A word from Laquen, the 'Colonel Sanders and his Chicken' costume creator:

My boyfriend and I are wearing the costume. I wanted a couple costume that was unique and not done by many people before. Although all couple costumes are adorable I wanted something original. I spent a lot of time on Google and Pinterest looking at creative and funny couple costume ideas when I found Colonel Sanders and his chicken. I did not like and could not afford any of the costumes available so that is how I created my own.

The chicken costume I created from head to toe and I had an image in my mind and just went with it. The headpiece was bought and it was just a clip with feathers attached. The top half of the costume was a white long sleeve shirt that I sewed feather trim around the wrists. Then over that I wore a white corset. Along the top edge of that I attached a feather boa. Then for the bottom skirt, I bought an old tennis skirt. Then I bought "plush fur" fabric from JoAnne Fabrics so look like chicken fuzz and attached that to the skirt making it short in front and longer in the back. Then once I had the shape of the skirt I wanted I sewed boas all along the length of the skirt until it was covered in feathers. Then under that I wore yellow tights, and on my feet I wore old shoes I bought at Goodwill and painted yellow to match my legs. My "purse" for the evening was a KFC bucket that I went to the store and asked if I could have. Then I bought red straps from JoAnne Fabrics and attached them on the inside of the bucket using silver rivets.
The Colonel Sanders costume didn't require as much sewing, but more just finding the pieces everywhere. It was a white dress shirt and as light of beige pants we could find at Goodwill. Then we bought plain black suspenders. For the glasses we found a pair from the dollar store and popped the lenses out. And for the pocket handkerchief I sewed a scrap of black fabric with red stitching. And then on Ebay we bought a KFC name tag and then wrote "The Colonel" on it. When the nametag came in the mail it came with a piece of paper that looked like a KFC chicken leg so we put that in the pocket with the handkerchief. We also bought a vintage western bowtie to get the official "Colonel Sanders look"