Colonel Sanders and His Chicken Costume 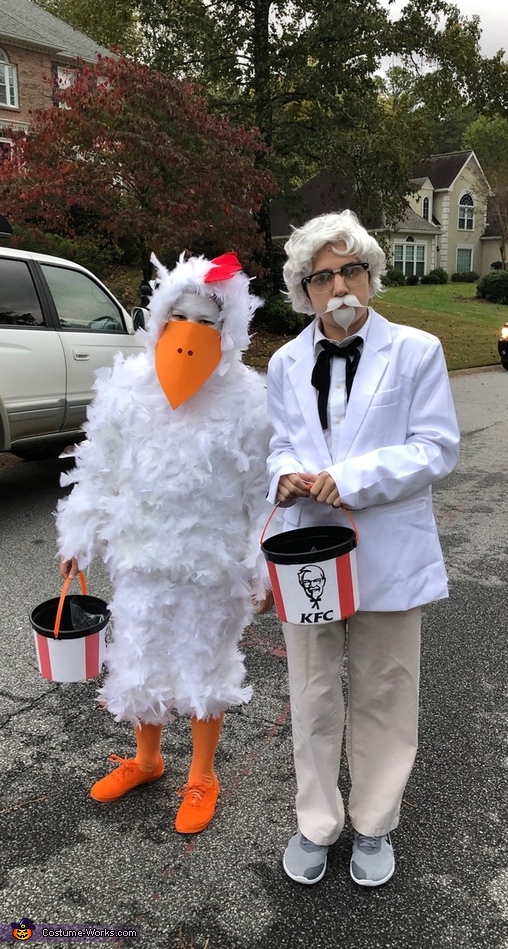 Colonel Sanders and His Chicken Costume

A word from Simone, the 'Colonel Sanders and His Chicken' costume creator:

I made these costumes for my younger brothers. We were wanting to try something that didn't look store bought. So we started looking for ideas and we came up with Colonel Sanders, but you can't have the Colonel without his chicken. My Youngest brother loved the idea of going around bwacking like a chicken at complete strangers. To make the Colonel costume I went to a thrift store and got a white button up and light khaki pants. I ordered a white suit jacket from amazon. I also ordered a white wig and a beard and mustache kit from amazon as well. We couldn't find glasses similar enough in a store, so we just ordered a pair off of ebay. We got thick black ribbon for the black tie and just cut it to the desired length. For the shoes, we just let him wear some sneakers that he already had. The chicken costume took a little longer to make, but fun nonetheless. I started by getting a white hooded sweatshirt and white sweatpants. I got a sheet of red felt to make the chicken's comb. I just traced a pattern and cut it out. Then I sewed that to the top of the hoodie. Then I bought packs of white feathers to glue to the sweatshirt and pants as needed. I just used fabric glue to stick them on. Most of them stayed on except for a couple that came off while running around trick or treating. I got a piece of orange foam felt to make the beak. I used a pattern to cut it out and tied a string of elastic to it on each side to rest over his ears. I bought orange tights online and spray painted some tennis shoes orange for the feet. Finally, I just used a little bit of face paint to paint the top half of his face white. The boys loved all of the attention they were getting. People kept asking the Colonel where their Kentucky Fried Chicken was. We even took them to KFC to have their picture taken with the Big Chicken. We'll definitely use these costumes again!