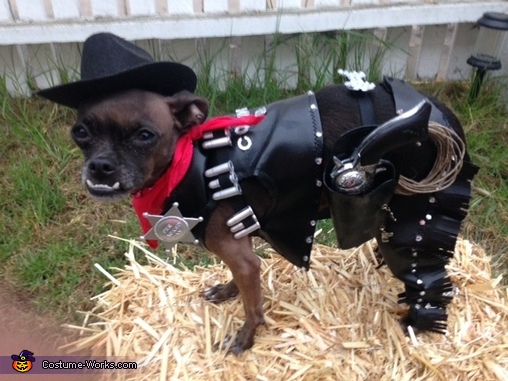 A word from Angie, the 'Cole the Cowboy' costume creator:

This is “Cole the Cowboy”. As you can see Cole has a slight under bite and I just thought he would make a good cowboy! I had no pattern to follow for the vest and chaps; I just knew what I wanted them to look like. Thankfully my dog is very easy going because I had to try them on him numerous times to get the fit and look I wanted. I cut the fringe and hand sewed them on chaps. To give the chaps a little pizzazz I glued crystals all the way down each leg on the seam and around the seams of vest with the exception of the neck area and arm holes. I then attached crystal letters to the back of vest. To keep chaps from sliding off, I sewed snaps to the vest and chaps and used two strips of 1” elastic to attach them to each other. For the bandana, my dog is rather small so the bandana looked too bulky on him. I simply cut the corner of a regular bandana and rolled it up about half way and tied it together with a simple knot. Now for the gun belt, the belt that came in the toy set was way to flimsy. I used a 1” wide black binding strip for the belt and sewed snaps at the ends to connect them. When I put the holsters on the belt they hung in the wrong direction. To solve this I sewed a small loop of elastic to each holster for the belt to go thru to make them hang in the proper direction. To keep the holsters from sliding and hanging under the belly, I attached snaps to the elastic that was added to each holster and a snap on each side of the belt at the position I wanted them to hang. I then added cowboy themed jewelry charms to each holster through small holes that were on each holster. I made the crystal dog bone belt buckle by drawing the size bone I wanted on a piece of heavy weight paper. Then I cut it out and simply applied crystals to it. The bone belt buckle was attached to belt using Velcro. The bullet belt is made using 1” elastic with plastic bullets that I painted with silver paint and glued to the elastic. I connected the ends of the bullet belt using Velcro. The badge from toy cowboy set I painted silver (same as bullets) and attached it to a bead landing bar pin and pinned it to vest. For the rope, I took some twine and looped it, then attached it to belt. The cowboy hat I was lucky enough to find on line. To give it a little something extra I strung beads and glued them around the crown of hat. The last thing is the spurs, it’s hard to see in the pictures but he does have spurs on. I took 16 gauge silver wire and put it through two external lock washers half the length of wire. Then folded wire in half and twisted several times. I then took each end of wire and formed sides of spurs and attached black ribbon and a crystal to each side of spur. Spurs were attached to chaps using Velcro. There you have it, that’s my version of a cowboy dog costume.