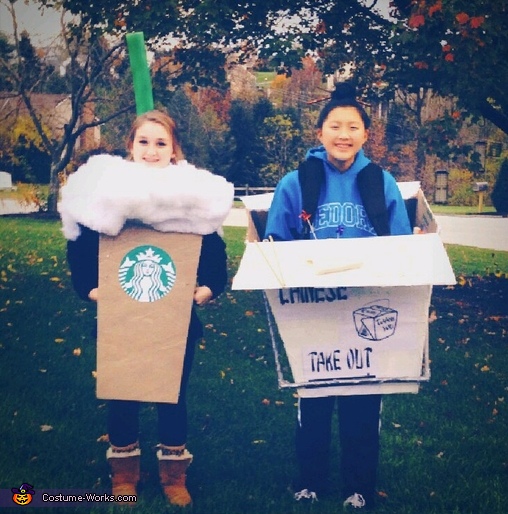 A word from Bailee, the 'Coffee & Takeout' costume creator:

My friend Kennedy is wearing the Starbucks costume, and I am wearing the Chinese Takeout Container. Keep in mind, I'm a South Korean girl. Our general theme was "stereotypes". Kennedy went as a "white girl" hence the Starbucks and she wore what many people woulde would think is the standard white girl attire; which was a Northface, leggings and of course Uggs. Her costume was made of out of spray painted cardboard for the cup, with a Starbucks logo glued onto it, a whole lot of white fluff for whipped cream which by the way was all over the streets by the end of the night and to top it off, a green spray painted pool noodle for the straw. My costume was just a tad bit more complex. I built the box out of cardboard and painted it white, then taped on the pagoda and the words "Chinese Take Out". My family bought some PVC pipe and my dad and I measured and cut to assemble an authentic take out handle. We then rolled the entire handle in silver duct tape. My dad then sacrificed a pair of golf bag strapd to attach to my costume for easy wearing. He's still a little sore about that (; Finally, my dad got a little crazy with some foam insulation and tortillas and made little spring rolls to glue to the lid which he then proceeded to stick pin wheels inside of them. I finished the outfit by putting my hait in a bun and putting chopsticks in the bun. What sounded like a long process was one of the best times, me and my best friend Kennedy has ever had making a costume for trick-or-treating. We're 15 and keeping the tradition alive!