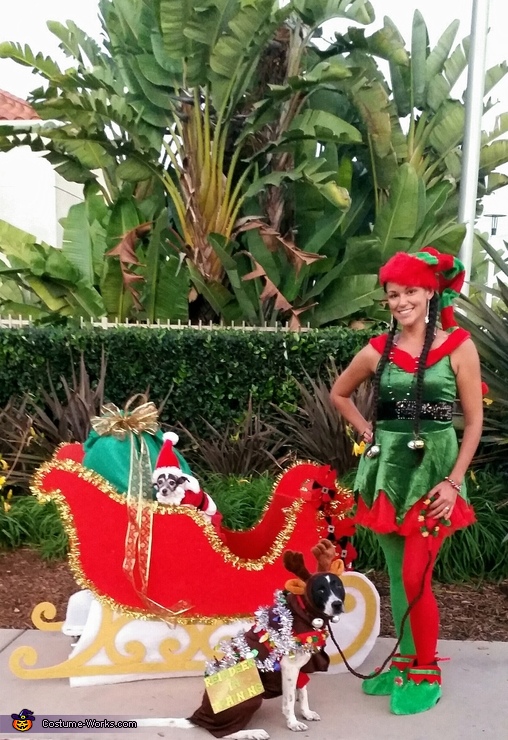 A word from Lorraine, the 'Christmas for Halloween' costume creator:

I decided to go with Christmas for Halloween after creating a Thanksgiving for Halloween costume for my smaller dog, Odie, and I last year. Originally I was going to be the Reindeer and Odie would be Santa. But then I rescued my larger dog, Klo, on black Friday last year and I thought it couldn't be more perfect! So I dressed as an Elf, I dressed my 9 yr old Russell Terrier, Odie, as Santa, and I dressed Klo, my 2ish year old Border Collie mix, as our 'Reindeer in Training'.

When I thought of the idea at the end of 2013, I had no idea how I would pull it off. I had to learn how to use a sewing machine, a jig saw, and a skill saw to get the job done. The sleigh and reindeer costume are homemade, as well as Odie's Santa beard. The Santa costume itself, and my elf costume and accessories are store bought.

We'll start with the sleigh. I used a store bought design for a Christmas yard decoration and put my own spin on it. I used 2 4ft x 8ft pieces of plywood, 6ft of 2"x2" board, 3/4" screws, 8 latches, and some white fabric to create this sleigh. The total cost was approximately $40 for materials.

In an effort to make it light weight, I used 1/4" plywood. Rather than screwing all sides permanently together once they were cut, I decided to assemble the sleigh with latches so that the front, back, and sides would come apart into 4 separate pieces. Since the plywood was so thin, I added a piece of 2x2 to the front and back edges of each side panel, as well as to both sides of the front and back panels so I could attach the latches to the 2x2's. I used 2 latches in each corner to assemble the sleigh. I also attached a piece of 2x2 on each side panel of the sleigh to set the seat part onto. Rather than just setting a pie of wood on top of these pieces for the seat, I attached small pieces of wood to the bottom of the board used for the seat to keep the seat from sliding forward. There are also 2 pieces of 2x2 towards the bottom of each side of the sleigh. The idea was to mount the sleigh onto a flat dolly for mobility when we went to Halloween events in our area, so the 2x2's were placed at just the right height so that when mounted on the dolly, the sleigh would not drag. I also screwed hooks into these pieces so that we could attach bungie cords from the sleigh to the dolly to keep the sleigh from moving. Since the 2x2's were mounted on the railing of the sleigh, I knew they would stick out. I also knew the dolly would show through the railings. I decided to hot glue a piece of white fabric to the bottom of both sides of the sleigh before mounting the 2x2's mainly to hide the 2x2's and dolly, but what was even more awesome is that it gave the appearance of snow! I then decided to glue a piece of the white material to the bottom of the front and back panels and used it to drape over the ends of the dolly to hide the front and back of the dolly as well. In the end, it gave the appearance that the sleigh was floating on snow.

Now for all the little decorative details! I painted the sleigh with 2 coats of Candy Apple Red Semi Gloss Behr paint and the railings took 2 coats of Amber Brew Satin Behr paint. While painting the gold, I painted a small portion at a time and as I painted I sprinkled gold glitter(from Walmart) on the wet pain. Once dry, I sprayed a clear coat across the glitter to secure it. I then used a hot glue gun to glue the gold garland around the edges of the sleigh. I screwed a small indoor decoration hook into the back panel to hang the Happy Holidays sign. I then wrapped the rope handle of the dolly in red garland and tied bows along it for decoration. Once all sides of the sleigh were latched together and the seat was set in, I draped a red blanket over the seat for my dog to sit on. Since I didn't build a solid bottom to the sleigh, I used another red blanket across the bottom of the dolly so if anyone looked in from above the blanket would cover the dolly and bungie cords. Between the paint, glitter, garland, bows, hook, and sign, the cost for additional decorations was around $45.

Now on to the Reindeer! I selected a light weight stretchy fabric keeping my dog's comfort in mind. I measured around her chest, around her belly, around her neck, from neck to tail, and the distance between her 2 front legs and then created my own costume design. The costume wraps around her body and connects along the bottom using snaps. I cut 2 hols for her front legs and used elastic straps to fasten the costume on her back legs. I decided to add a 2nd piece, a hood, to cover her head and neck. For this piece I measured around her head just behind her eyes, and then from that point to her shoulders. I then added snaps to the hood and to the reindeer antlers to fasten the antlers onto the hood so they wouldn't fall off while she walked. For the red harness, I measured around the barrel of her chest and across the front of her chest and cut rectangular strips. I sewed the 2 pieces together to make the shape of the harness and then attached snaps to the ends that would meet under her chest. I hand stitched the colored puff balls onto the harness for decorations. I made the leash by braiding strips of the brown material and then hand stitched the colored puff balls onto the handle. I glued foam letters from walmart to a rectangular piece of gold glitter foam purchased from the fabric store to make the 'Reindeer in Training' signs. I glued safety pins to the back to fasten them to the brown fabric. I then wrapped a piece of garland with Christmas lights around her for the finishing touch. Total cost of materials - $30.

While sewing the Reindeer costume I also sewed a large piece of green material into a gift bag to set into the sleigh. I used a 3ft x 6ft piece of fabric and sewed it in half, leaving one side open. I then stuffed it with 2 pillows and used a 9 ft piece of ribbon to make my own bow on the top. Total cost of materials - $15.

Finally, although the Santa costume is store bought, the beard was made by gluing cotton balls together. I then glued safety pins to one side to attach it to the strap of her Santa hat.

A lot of heart went into this costume and I had a lot of fun making it! Hope you all had a Happy Howl-o-ween!