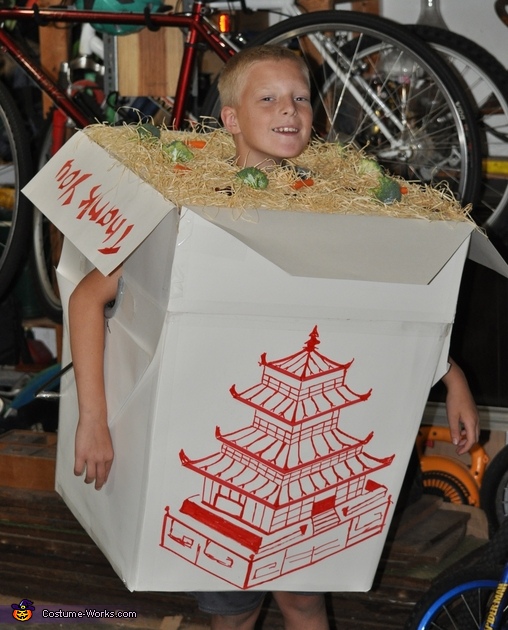 A word from Dale, the 'Chinese Takeout' costume creator:

My son Caleb, age 11, enjoys Chinese food so much, we decided to put together a costume of that theme. We started with a dish pack moving box, Styrofoam, packaging tape, cardboard, and 6 sheets of white poster board. An opening was cut for the head and arms, and the bottom flaps of the box were folded to the inside and taped. Styrofoam was added to the inside of the box to pad the shoulders. A small piece of Styrofoam was taped onto the top corners of all 4 sides. Cardboard strips were then folded and taped on each corner from top to bottom to create a tapered, bevel- shaped boundary on each side of the box. Corrugated cardboard was cut to create a face plate and rear plate trimmed to match the beveled borders and taped on to the box with packaging tape, padded with Styrofoam as needed. Shorter panels were cut and taped on the sides from the bottom of the arm holes down. White poster board was trimmed and taped onto 4 sides from top to bottom. An envelope style fold was added to the posters on the sides below arm openings. A lantern was placed inside the box to project the location of the arm openings onto the poster board for easy cut out using an Exacto knife. Additional poster board pieces were cut for the top and lid flaps. A Chinese pagoda was sketched in pencil on the front of the box. The image was colored in with a wide permanent red marker. Lettering was added to two of the flaps using a computer to make a stencil, then coloring in with red marker. An inexpensive curtain rod was bent to make the handle and plugged into holes punched into the side of the poster board, bending about 1 inch of the rod over in the space between the poster board and the cardboard. Foam backer rod was split open with the knife and cupped around the head opening and arm openings and secured with the clear tape. 2 small bags of brown grass were glued to the top of the box to resemble lo mein noodles. Real broccoli and carrots were pinned to the top with toothpicks using an awl. Beef jerky was glued to the top as the meat.

The costume was a huge hit in our neighborhood. It was a conversation piece for the folks opening their front doors and caught the attention of almost every person he passed on the street.