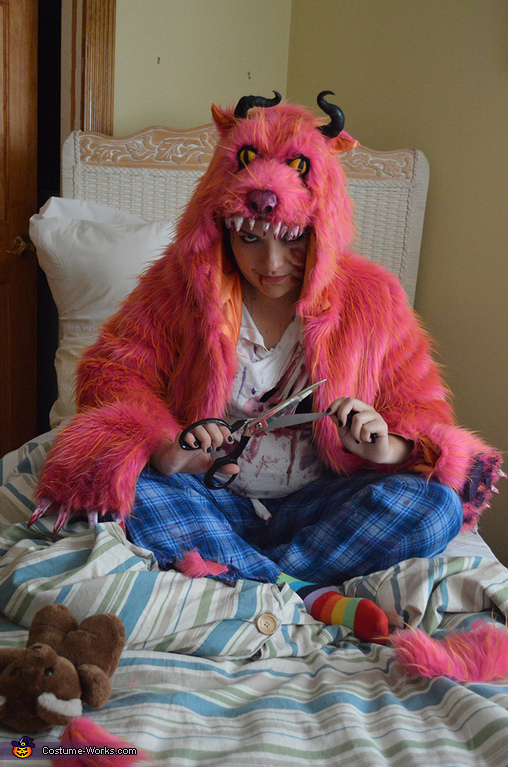 me after slaying the monster

A word from Angelica, the 'Childhood Monster Slayer' costume creator:

THE STORY:
The idea come from a short story I wrote in my sketchbook;
"Once upon a time, there was a young girl who was tormented by a monster. Every night it would come out from either under the bed or out of the closet to taunt her. No one believed of the monster’s existence. Not even her parents or her friends.
She decided that she had enough. She stole her mother’s shears, hide it under her pillow, and waited all night for the monster to return again. He did. The girl whipped out the shears from under the pillow and put up a fight. The beast was finally killed. As victory; the girl gutted him, skinned him, and made a pelt out of him. A pelt she wore with pride, to the horror of her parents and petrified classmates.
Unfortunately, this conquest came with consequences. Unbeknownst to the girl, the blood of the beast in the pelt began to seep into her skin. She began to grow talons, fur, fangs, yellow eyes and a insatiable hunger. She was the monster now."

THE BODY: For the body I used a regular hooded coat pattern from the book Built by Wendy Coat and Jackets: The Sew U Guide to Making Outerwear Easy by Wendy Mullin. The hood pattern was converted into the head. I cut and sewed each part of the costume. I added hooks to the edge of the head and the paws so that they can be removable in the future.
THE HEAD:
The skeleton of the head was sculpted out of recycled foam mats. Using the heat gun, I was able to curve the parts into a helmet. Other smaller pieces were glued and used to create the snout. Using the pattern for the hood I covered the head and snout with the fur, leaving space in the front where the eyes should be. The eyes, horns, teeth, nose, and claws were all handmade with oven-baked Sculpty Clay. Everything except the eyes, teeth, and nose, had a hole made into them so that the can be sewing into the coat. the parts were reenforced with the hot glue gun. Horns and ears were sewn on the top of the head.
THE PAWS: Measuring my hands, I made mittens out of the remaining fabric. the top remained open for me to hand sewn the claws in. After the were places, I added a bit of glue and sewn in any remaining opening.
THE FINALÉ: After I added the fashion hooks to each part, I attached them all together and then used acrylic paint to add human bloodstains, monster blood stains and other textures. The rest of the costume included torn up and painted up old pajamas. The makeup for the costume was a scar latex tutorial I had picked up on YouTube.