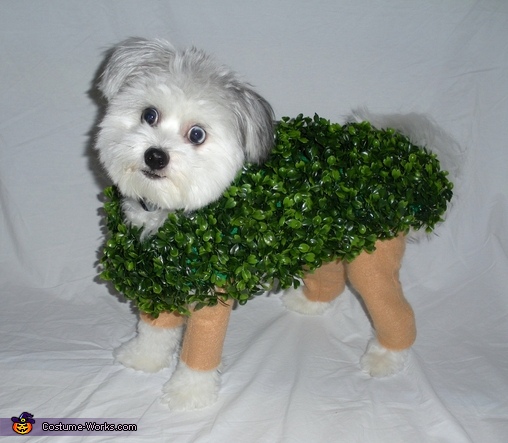 A word from Jessyca, the 'Chia Pet' costume creator:

Last year, I was brainstorming ideas for a local pet store contest, when I saw one of the Chia Pet commercials on television. I thought it would be adorable to do a real live Chia pet with my dog, Cappie!

This year, this costume is very popular on Pinterest and DIY blogs. However, when I made it, it had not yet become an online fad, so my technique dealt with a little more trial and error. First, I took terra cotta colored felt and created felt “tubes” that were tailored to the shape of Cappie’s legs. These felt tubes went from the top of his feet all the way to the top of his legs. I then created what was basically a set of suspenders. I used green one-inch wide elastic and ran it across his back, sewing it to the felt tubes on each of the front legs. Then I took the elastic and ran it diagonally from one of his front legs, to the opposite back leg. I then did the same with the other front leg and opposite back leg. This created the terra cotta legs of the costume, but still allowed Cappie to freely walk, sit, move in any way he needed to and even potty without hindrance. I included a photo of Cappie with just the terra cotta legs. I then created a basic dog coat out of green felt that would cover most of Cappie’s body, other than his legs, tail and head. It wrapped around the front of his chest and velcroed in place and had a felt strip inside that wrapped around his belly and velcroed shut, which kept the back from sliding around. I bought two square mats of artificial boxwood from the craft store to cover the wrap. I snipped off each section and individually hot glued them to the wrap to make sure it was entirely covered and none of the felt would show through. After his costume was finished, I took a photo of Cappie in front of a white sheet and created a Chia Pet box with him on the front.

I took Cappie out again this year in his costume to a different contest and it was a hit. Everyone was surprised that his costume was homemade and everybody loved that he had his very own Chia Pet box. Cappie loves to dress up and was able to move about in the costume just as easily as if he wasn’t wearing one.