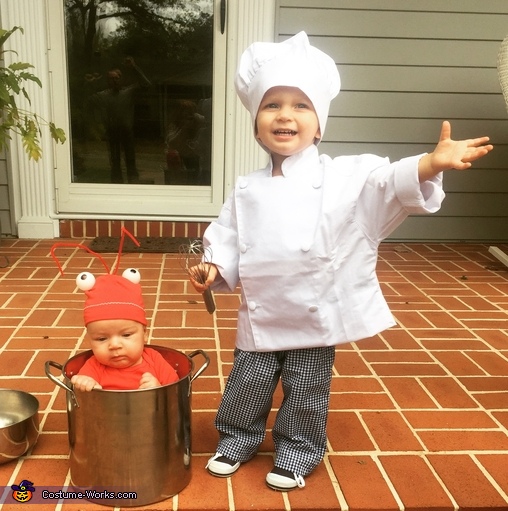 A word from Kristen, the 'Chef and Lobster' costume creator:

I wanted coordinating costumes for my two boys, but knew that my youngest would not be old enough to sit up in the wagon or stroller. I needed a costume that included something to help prop him up a bit. I came up with him being a lobster that could sit in a pot. Once I decided on that, I researched some things that would coordinate with it and found the idea of a chef. To create the lobster costume, I dyed a onesie, pair of pants, and baby hat all red. I then hot glued on the eyes (they were ping pong balls with a black circle drawn on with a Sharpie) and added two red pipe cleaners for antennas. For the chef, I ordered a jacket and hat, had him wear checkered pants we already owned, and gave him a spatula and whisk from my kitchen. They both rode in the wagon for the Halloween parade and trick or treating. It turned out to be a perfect costume for both of their ages! The chef (Banks) is 22 months and the lobster (Hunt) is 3 months.