Spaghetti and Meatballs
by Lynn

Spaghetti and Meatballs
by Lilly

Spaghetti and Meatballs
by Katrina 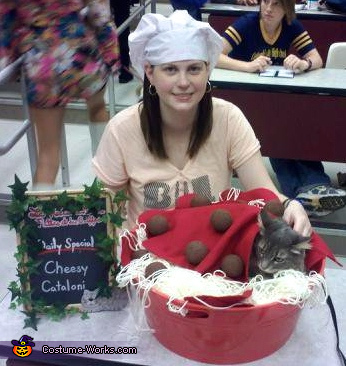 A word from Jessyca, the 'Cheesy Cataloni' costume creator:

My cat, Dusty, would often climb into my bowl of yarn when I would be crocheting and fall asleep. When I found out about a local pet costume contest, I began brainstorming about a costume for her. One day she was sitting in the bowl sleeping, and it looked like she was sleeping in a bowl of spaghetti. I took it from there and created the dish “Cataloni”.

First, I cut tan yarn into long strands, to represent pasta. This was placed in a large bowl. I used dark red felt to create a simple vest that velcroed shut. I then attached a large piece of felt to the top of the vest to look like sauce was spooned on top of the cat. I then took Styrofoam balls that I painted brown and hot glued them to the felt to represent meatballs. The vest was placed on Dusty, my cat, who was placed in the bowl of yarn. I also created a “Daily Special” sign by using a small chalkboard. I hot glued artificial ivy around the edges and created an easel so it would stand up on its own. I painted “Le Restaurant de Pattes et de Griffes” as the restaurant name, which is French for the Restaurant of Paws and Claws. It also states the daily special, which is Cheesy Cataloni.

I used this costume at a club meeting as well as a costume contest at a pet store. I dressed myself up as a chef. Everyone enjoyed this costume a lot, mostly because people did not realize there was a cat in the bowl at first! People were very surprised that she would just sit there while people would walk by and there were dogs running around barking. My costume was also the only one in the contest that was homemade, so people were very interested in how it was made.