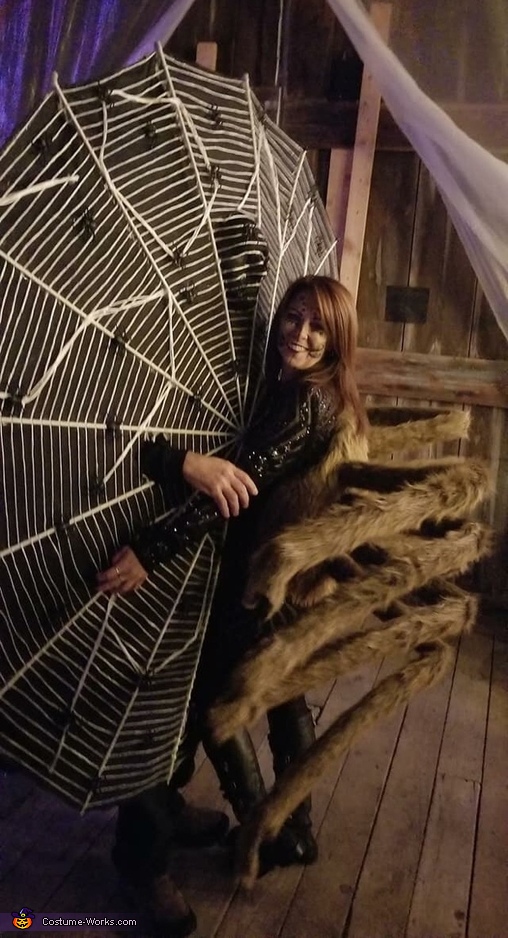 A word from Sandi, the 'Charlotte's Web' costume creator:

This is Jimmy Z and Sandi T. Charlotte's web was born when my DIY boyfriend found an enormous ball of twine in his house. He thought... 'what can I make with this?' Being both a Halloween and costume fanatic, he thought 'I know... an enormous spider web! Charlotte's web!' At first he was going to be the web and glue a huge plastic spider to the web and he wanted me to be Wilbur - the pig! I said absolutely not! ;) At first I was going to be the little girl from the movie but a friend of ours thought better of it... she suggested I be the spider. He was thrilled and immediately got to work.

He fashioned the web of fiberglass pipes and weed barrier. He glued them in a star-like shape with the weed barrier behind to hold it together. He glued a mask to the inside to provide a place for his face (eyes and mouth) and cut holes for his arms. The pig slippers add a nice touch since Wilbur had to be represented somehow. He slips into the web like a giant envelope and says there is plenty of room inside to move around and even take pictures.

The spider back was made of a plastic piece he had laying around that happened to be curved enough to fit perfectly on my back (he just had to soften it a bit). And the legs of plastic piping that might be used for plumbing. He cut them all to shape, screwed them together and then covered them with brown fuzzy fabric. The back and legs stay on with velcro from a back supporter that he glued to them and the whole piece zips into a dress he found at Goodwill.

The whole costume didn't cost much more than $50 or so for supplies as he had most everything laying around. :) Say hello to a real live Charlotte's web! :)