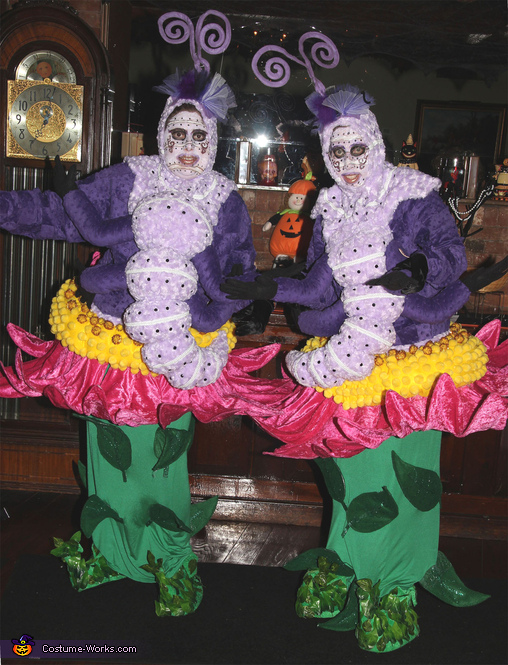 A word from Bonnie and Beth, the 'Caterpillars Sitting on Flowers' costume creators:

We dressed up this year in an illusion costume of caterpillars sitting on daisies. They were made to look like the top half of our bodies was a caterpillar, and the bottom was the flower. We got this idea from seeing other illusion costumes. We liked the gnome sitting on a mushroom illusion costume, and always thought that was a cool idea. So we decided to do a different take on it. We thought caterpillars would be a good choice, because they are so cute and colorful. Then we thought about what they sit on, and decided on making flowers. These costumes were completely home-made, from scratch.

The caterpillar is made from lavender fabric, which was used to create separate balls that were sewn together to make up the caterpillar body. We then decorated the body with white trim and black jewels. We made a headpiece sewn out of the same fabric with tall antennas created out of felt which covered thick wire, and decorated with tulle. The rest of the caterpillar's body was made with a shirt, which we completely covered with squares of purple fabric. We also made additional arms for the caterpillars by sewing tubes of the fabric, which were stuffed, and then making fake hands out of black felt. We wore black gloves on our own hands, so it looked like we had three sets of hands.

For the daisy part of the costume, we started by making a yellow donut like shape out of yellow felt, that could go around our waists and velcro in the back. We then covered it completely with yellow pompoms and gold glitter pom poms. To make the petals of the flower, we sandwiched two pieces of shiny pink fabric over thick wire, formed into a petal shape. We then glued about 30 of these petals onto each of the yellow "donuts", bending them upward. For the stem of the flower, we bought green tube skirts to use as the base. We then created leaves in the same way as the petals, by sandwiching wire between two pieces of green felt. We used glitter to make lines on the leaves, and glued them onto the skirt.

Finally, we bought green jester shoes, and glued synthetic leaves all over them. To complete the look, we did our faces lavender and added white stripes and black dots to match the pattern on the caterpillar body. These costumes took at least two months to complete, and were a lot of work, but we really like the way they came out.