Wilson From Cast Away
by Sarabeth 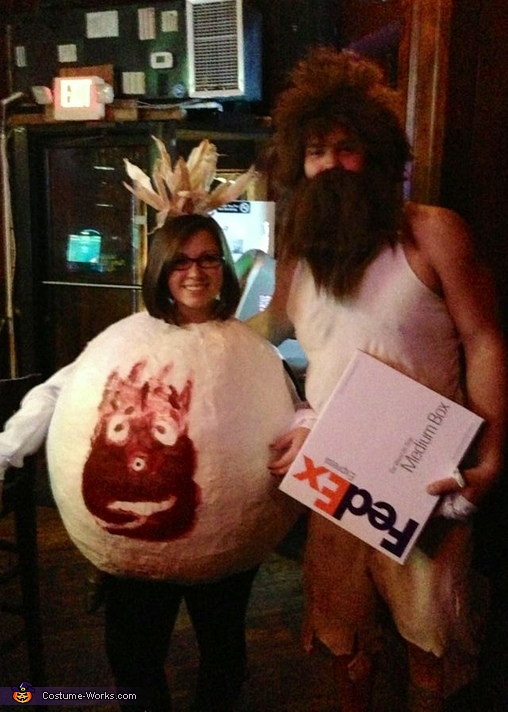 A word from Donna, the 'Cast Away' costume creator:

My boyfriend and I wanted to come up with a really creative and unique couple’s costume that we have never seen before. We started thinking of ideas, but our Castaway Couple Costume idea didn't form until one day in August. We were flipping through the TV channels, and we stopped on the movie Castaway. Tom Hank's relationship with Wilson, the volleyball, striked us as an amazing idea. I quickly started researching paper mache and our idea quickly came to life! Overall, our costume took about 5 weeks to complete. We bought a 42" beach ball to be the template for Wilson. I applied 5 layers of paper mache, over 4 weeks using a paint brush, flour, water and about 25 newspapers. Once the ball was firm and dry, we removed the beach ball from the inside and started to begin painting him white. We used 3 different red paint colors to create the "blood" red of Wilson's face. We realized it was much easier to paint his face with our hands for a more authentic feel. The back of the ball also has the Wilson Company Logo which was painted on with black paint and a paint brush. During the final week, we cut the holes out for my legs, arms, and head. We used an exacto knife and kitchen scissors. The cutting process took about 3 hours because we wanted the open areas to look very smooth and polished. I bought a headband at the dollar store, and hot glued corn husks to the headband to create my headpiece/Wilson's hair.
Tom Hank's costume was a pair of old shorts and an old tank top that we cut up with scissors. We used dirt from our back yard to make the clothes look dirty, old and tattered. He also used a bandana to "bandage" his hand. We purchased the beard and wig set. Overall we spent $18.50 making this costume.
Paint: $3.50
Beard and Wig: $14.00
Headband: $1.00
Newspaper: Our friends and family donated their newspaper
House hold items I already had: glue gun, corn husks, paint brushes, scissors, exacto knife
The reactions we got to our costume were amazing. Almost every person on the crowded Philadelphia street's screamed "Wiiiilllllllllsoooooon" attempting to recreate Tom Hank's pivitol scene in the movie when Wilson is floating away from his raft. People were amazed at the construction of the costume and how creative we were. Multiple people told us that it was the best costume they have ever seen.