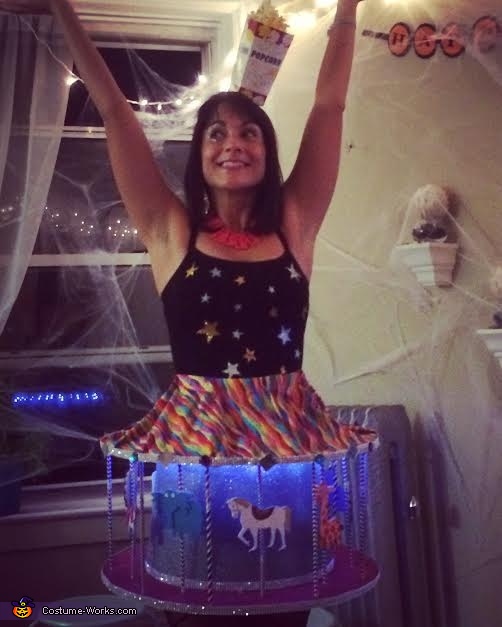 A word from Cara, the 'Carousel' costume creator:

I love Halloween, but I can't sew. Consequently, over the years, my costumes have almost always been made predominately from cardboard (a box of pasta, the house that fell on the Wicked Witch of the East, etc.) This year's Carousel Dress is no exception. My name is Cara, so a "Cara-sel" dress was not only a new challenge, but an appropriate pun. I honestly can't pinpoint how the idea arose, but I remember deciding back in August that this would be my next costume.

The main frame of the skirt is a lampshade from which I removed the steel prongs that hold the lightbulb and then spray painted it with glitter paint. The base and top of the carousel are old, thick pieces of cardboard that I cut with an electric saw, pained red, and then attached to the lamp shade with glue. I purchased battery-powered tea lights that I glued into the top of the carousel so that it could be lit up.

The poles of the carousel were perhaps the most challenging piece. I purchased pencils from a discount store, removed the erasers, whittled down the bottom of half of half of the pencils so that they could slide into the empty metal eraser holders. I reinforced this attachment with glue. Once the two pencils were securely attached, I sawed them down to fit the height of the carousel. I painted over the metal eraser holders with designs to match the rest of the pencils and I affixed wooden animals I found at a craft store (most of the animals were pre-painted, though I did have to paint the horses by hand). I spaced the pencils evenly around the carousel, creating a front and back line of twenty "poles" and attached them to the carousel with glue. Because I cannot sew, I purchased fabric and a friend created a circle skirt for me. I attached the skirt to the top of the carousel with glue and then lined the edges with "bling" (a string of shiny lining and plastic "jewels").

The shirt, meant to represent the sky above the carousel, was originally a simple black camisole. I cut out dozens of stars from glittery iron-on pieces of fabric and then ironed them to the shirt. The necklace, which is hard to see in the photos, is a string of red tickets that you might buy to purchase a ride on the carousel. And, finally, the "hat" is a popcorn container stuffed with paper and glued to a headband. I popped actual popcorn and, at first, attempted to glue it together. The popcorn sucked up the glue and wilted it down, so I strung the popcorn on a thread and then sewed the popcorn into the container so it was held in, like a cage. I wore fishnet stockings and glittery shoes.

Though I have no idea exactly how much time this costume took me, I worked on it over the span of two full months. I likely spent 30-40 hours creating it, and more just trying to figure out the logistics.

I wasn't able to sit in my costume, nor could I use the restroom. Consequently, I made my boyfriend play the role of Carousel Maintenance Man, Norm. He wore a jumpsuit with a tool belt and every time I needed to use the bathroom or fit through a small space, he would help me wiggle the carousel up over my head. Though I could put the carousel on by myself, it is impossible to remove alone.

I wore the carousel dress two nights in a row and it survived, mostly intact. I loved every minute. Halloween is my favorite excuse to create something wild and whimsical. I am generally an introverted person, but costumes allow me to be someone more extroverted, if just for a night (or two)! I have no idea how I'm going to top this next year, but I'm already brainstorming ideas...