Mermaid captured by a Pirate
by Sandy 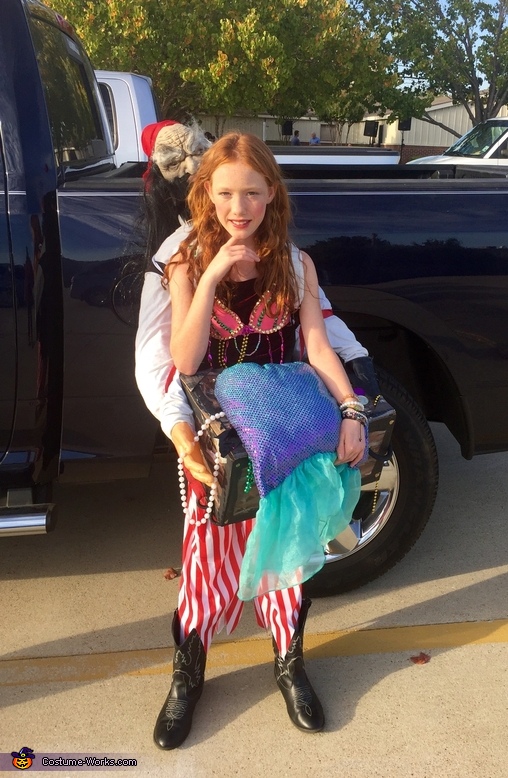 A word from Kellie, the 'Captured Mermaid' costume creator:

My 10 year old daughter, Sophea, is wearing the costume I made for her last year but she is wearing it again in this picture to a Trunk or Treat this year. I got the idea from Pintrest but with very little instructions. I already had the pirate pants, vest, white long sleeved tshirt, white turtleneck, boots, leotard, bandana, 2 liter drink bottle for a form for the head, strap to go around waist to hook to box & hold it around her, Mardi Gras beads, dowel rod, brown, black, tan & white paint for box and mermaid costume. I had to get a backpack (to cut up so she could "wear" the pirate on her back), a old man face mask, extra hair to glue to back of head (Dollar Tree dress up hair on headband), bra from a thrift store to decorate, polyfil to stuff the mermaid tail & pirate body, silver duct tape for pirate body & colored duct tape (that as closely matches leotard as you can) to cover backpack straps, hook hand, plastic hand (Dollar Tree), & box. I used my husband to make the form for the pirate body by putting the long sleeved tshirt on him and wrapping duct tape around him completely covering the shirt. I cut the shirt (carefully while he was wearing it) partway up the underside of each arm and up the back until he could get it off. I stuffed the shirt with polyfil, & grocery bags & put the dowel rod in through the neck for structure. I taped off the bottom & the spilt places on the back and sleeves. The empty 2 liter bottle goes upside down in the neck of the shirt (and onto the dowel rod) with mask hot glued to the bottle. I hot glued extra hair to the back of the bottle and tied & glued a bandana on his head (the bottom of the bottle). I cut the backpack I got from the thrift store so that it just had a flat single layer with the straps attached & glued that to the stomach of the duct tape form. I put the white turtleneck over the duct tape form and cut slits in the shirt to pull the backpack straps through (undo them from the plastic piece on backpack strap, thread through shirt & reattach strap to plastic piece on strap. I hot glued a hand on one arm & a hook hand on the other arm. Pirate vest goes over white turtleneck. Cover backpack straps with whatever color duct tape that matches your leotard so it blends in. I glued Mardi Gras beads to the bra for a mermaid top. The mermaid costume was hand sewed shit at the waist, stuffed with polyfil & sewed shut at the bottom. Box was cut on the side that touches waist so that her body fit in the cutout. I put a hole on each side of the box on that side to attach a strap (a belt may work) that went around her waist to hold the box on. The box was painted to look like a treasure chest & glue Mardi Gras beads & doubloons to the box. I stuffed the top part of the mermaid costume into the top of the box. I put a hole in the side of the box to hook the hook hand tip into to help support the box. The other hand was harder to keep up on the side of the box because it also needed to be used to hold the pirate body close to her back. Gorilla tape under the sleeve is what finally held it in place.