Captain Morgan and The Kraken Costume 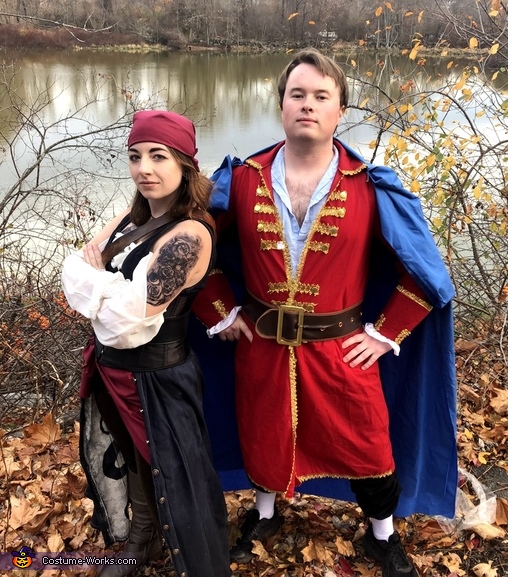 The Kraken and Captain Morgan

This homemade costume for couples entered our 2020 Halloween Costume Contest.

A word from Sarah, the 'Captain Morgan and The Kraken' costume creator:

For the past few years my significant other, Captain Morgan---I mean, Connor--and I have been doing themed costumes. This year we chose Captain Morgan and The Kraken partially to pay homage to the rums of our college days (when we met) but mostly just because pirates are cool.

We hope you like them! But also we're pirates, so if you don't like them we won't lose sleep over it or anything. Probably.

HOW TO MAKE THEM:

Watch the first Pirates of the Caribbean films "for research." Get inspired by Johnny Depp's eyeliner and watch the rest of the trilogy instead of actually working on the costumes. A week out from Halloween panic and get to business.

Captain Morgan
Connor's coat and belt were hand-me-downs from his dad, the cape was about 3 yards of fabric we got on sale at Joan Fabrics, and the ruffle pants came from the thrift store. The high sock/sneaker combination is actually just a normal part of his attire, but fit the bill quite nicely. Tip: The cape was heavier than we expected. It kept pulling his coat off at weird angles, so he's wearing suspenders underneath the coat which we pinned the cape to for extra support. We paid about ~$10 total for his costume--$25 if you have to pay for the hand-me down parts.

The Kraken
My Kraken attire is almost fully recycled from my closet. The white shirt is a cover up I bought for a work event (on backwards), the pants are fake leather leggings, the corset is from an outfit 3 Halloweens ago, and the boots are my fall work shoes.

The coat was the hardest part of this costume and what makes it Kraken instead of just pirate. It's a denim dress hand-me-down from my Mum. I used RIT black dye to darken it. To make the tentacles I drew a template our of 3 pieces of poster paper using the Kraken Rum label as a reference. Then I sponged on some cream fabric paint and called it a day. To help the coat stay open when I wanted the tentacles to be seen, I dismantled 5 clothes hangers and ran the straight edge through the sides of the coat. You only need 4, but I broke one of them incorrectly the first time... Buying the Dye, paint, belt/bandolier, and red fabric for the headpiece and waist wrap cost about $15. (Thrift shops are THE BEST.) My vanity drove the price up to about $30. I couldn't resist buying some tentacle earrings and the nautical tattoo.

And that's it! We're no Captain Jack Sparrow, but at least all the rum isn't gone. Happy Halloween, everyone!