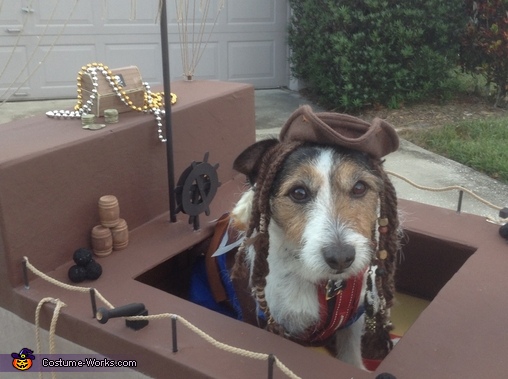 A word from Ivette, the 'Captain Jack Sparrow' costume creator:

Harley the Jack Russell was Captain Jack Sparrow, his ship was a 4 foot boat made out of boxes, paper mache, and painted. Accessorized with cannons that were constructed from cylindrical and wooden block pieces brought at the craft store. The cannon barrels were drilled out during assembly then painted black. The ship wheel was made from Popsicle sticks glued onto two poster board circles. Styrofoam balls were glued together and painted to resemble cannon balls. Treasure chest was made using a template and poster board accessorized with gold coins and beads. The sails were made out of white felt and decorated with skull and crossbones cutouts, the mast were wooden dowels secured by thick thread and the deck perimeter posts were wooden dowels to secure the ropes. A blue fringed table garland was added to create a water effect. His costume consisted of a blue toddler shirt and brown pants, belts were made from felt with poster board buckles spray painted. His dreads are made from brown yarn braided with beads and accessories attached to the inside if the hat with Velcro. Since he is a JRT we try to stay with the "Jack" theme.