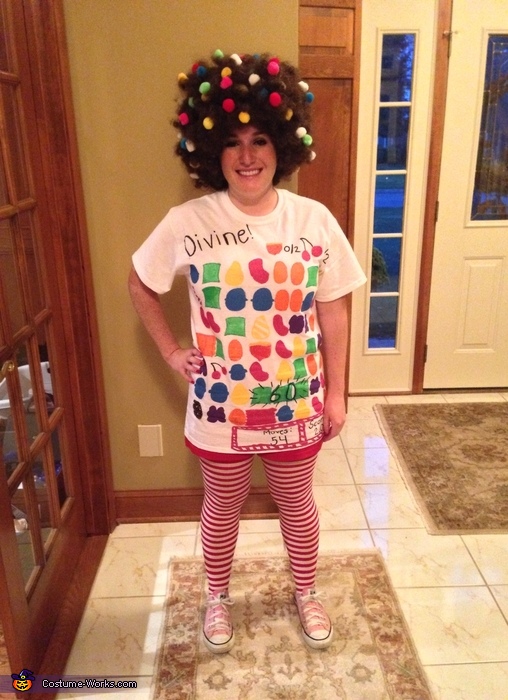 A word from Stephanie, the 'Candy Crush' costume creator:

I am wearing a Candy Crush costume that I created! Candy Crush is a game and app that people can download on their phones and play. It has become very popular over the past year. People talk about it all the time and I'm always talking about the game with people I know. I came up with the idea because I wanted to create a costume that was creative and relevant. I knew that a lot of people played this game so I wanted to make a costume that a lot of people could laugh at and enjoy! I am the one in the picture wearing the costume and I made it myself! For the head piece, I used a brown Afro wig and glued pom poms to it with a glue gun to make it look like the piece of candy you get when you get five of the same candies in a row in the game. I made the game board by using a plain white t-shirt and outlining the candies in fabric marker and then filling them in with fabric paint. I made it look very similar to the game. (The "Divine!", striped candies, brown candy with dots, three candies in a row, score, points, acorns, and cherries are all part of the actual game). I made the back of the shirt look like the board that shows what everyone's level is. You can link the game to Facebook and then people's Facebook pictures come up next to the level they're on so I glued on people's Facebook pictures to make it look more realistic. It looks very similar to the actual game. I also wore red and white striped tights that look like one for the striped candies in the game and pink Chuck Taylor's to pull the costume and colors together. I wanted to make this costume to get people to laugh. I always talk about the game with people so I thought my costume would get even more discussion going which it definitely has! I hope you enjoy it too! :-)