The Little Cactus
by Shannin

A Couple of Pricks
by Jen 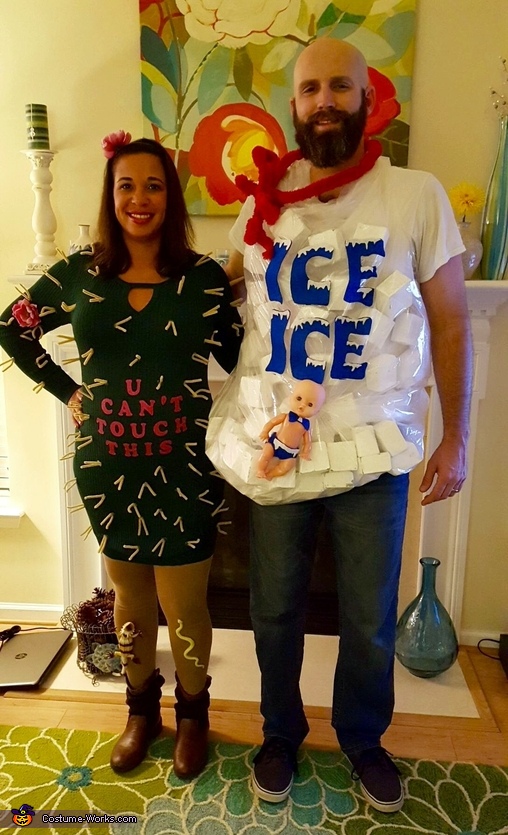 A word from Shawn, the 'Cactus and Ice' costume creator:

My husband, Josh, and I are expecting our first baby in March. Every year we have a clever couple's costume and this year we wanted to incorporate our baby to be. We have several "themes" for our costume: 1) accentuate the baby part (my belly, his overall costume) 2) hit 90's songs (U Can't Touch This by MC Hammer and Ice Ice Baby by Vanilla Ice) and 3)different biomes (desert & tundra- we're both teachers so naturally there had to be an educational piece to it all).

I had seen singles' ideas and baby announcement ideas online and ran with them and turned it into a couple's costume. I handmade both costumes with the exception of the green dress (purchased at Ross for $11.99). For the desert cactus I used tan chenille pipe cleaners, cut into threes and bent. Each one was meticulously placed and hot glued. I them used three pink flowers and strategically placed two on opposite arms of the cactus and one on a headband that I wore. I pressed glittery, pink, iron on letters to the dress in the torso region to emphasize the "song and baby" aspect of the costume. Because the weather was chilly , I knew I'd be more comfortable with leggings. I found tan ones to resemble "sand." I then glued a desert lizard and snake (both purchased at the Dollar Tree) to my legs to create the full biome effect.

As for my husband's costume, he was a bag of ice. His costume was 100% handmade and was quite the labor of love. I hand drew using absolutely no template other than eyeballing an image of an ice bag for the letters "ICE , ICE." I used blue and white felt to achieve the icy look of the letters. I used a queen sized mattress plastic protector as the "bag." I purchased a female baby doll at Dollar General for $5 and recreated it to resemble a "chilly" baby complete with an icy diaper and bow tie made out of blue and white felt. Both the letters and the baby were secured to the ice bag using industrial Velcro purchased at