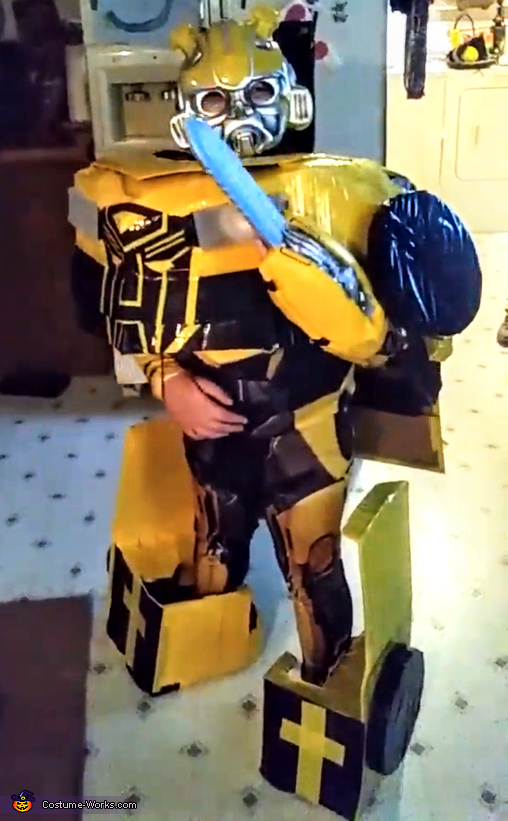 A word from Jessica, the 'Bumblebee Transformer' costume creator:

This was my son Billys first Real transformer costume!! The costume actually turned into a car! It is made from card board and duck tape! We added some finger lights we got out of a quarter machine (took about 3 dollars to get the right colored lights!) To use as the head lights and simply cut holes in the cardboard pushed thru the tupperware containers with the lights taped inside. Basically did the same with brake lights just added a strip of red tape over the tupperware.A light reflector taken from a bicycle (the middle tail light!)And an old motorcycle tag we had laying around! We used those pen retractors (im not sure of the proper name but it's simply a wire hooked to a pen on one end and to the retractor on the other end?!- It pulls the pen back in place once u let go of it!) on the doors of the car to pull them open to look like Bumble bees wings when he was standing! This took about 3 weeks but mostly due to trial and error!! I mostly used a glue gun on this. Card board can be awesome to work with, you can bend it or sort of mold it into what ever you like! Just be sure to wrap it in duck tape cause cardboard is easily worn out too! The windows were done with black tape painted lightly with a blue glossy paint. The transformer emblem on the front is made from cut pieces of black duct tape. We actually had to place a wire in the front is the car so he could hold it down. Hope yall like this as much as he did!!