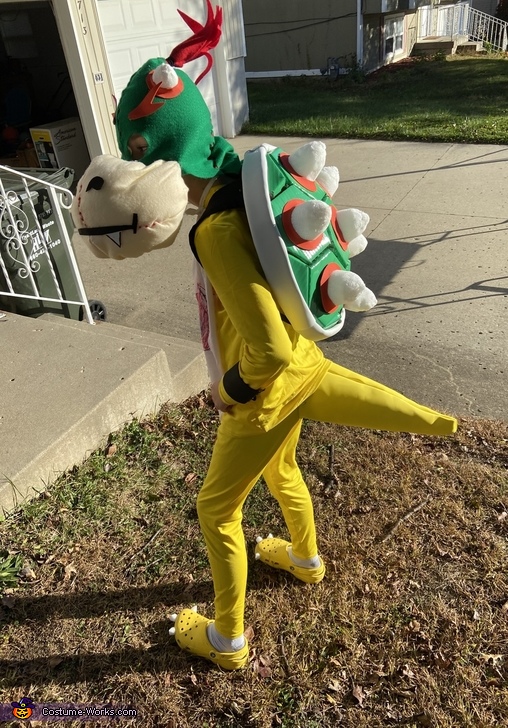 A word from Isaac, the 'Bowser Jr.' costume creator:

I make my kids costumes every year and this year my son said he wanted a bowser jr costume. My kids love all the mario games. I was dreading it because I knew it would be hard to make the shell. Then I looked at some images of bowser jr and got an idea. I realized I could cut out 7 equal sized hexagons out of cardboard with tabs on each side and sew them tI get her with yarn. I added some extra cardboard around the edges to fill in some gaps and then fit it into a rigid cardboard circle which made it pop up like a shell. I duct taped it into place and spray painted it green. Then covered it with a poly urethane layer to make it look slick. Then I added styrofoam spikes on each hexagon and foam trim. I also attached old backpack straps with duct tape and a cardboard back to close in all the yarn and stuff. The only other hard part was the head which I made out of felt and sewed it together with yarn. I connected the snout to the hood with hot glue. I also made the tail out of hot glue. We had some yellow thermal underwear and some yellow crocs already. That is how we made it.