Bob the Builder and his Buddy Lofty Costume 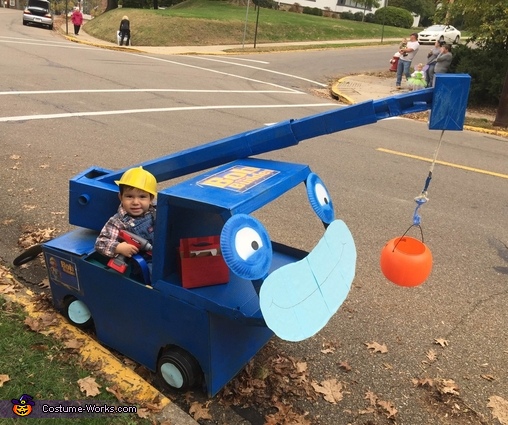 Bob the builder and Lofty.

A word from Chia, the 'Bob the Builder and his Buddy Lofty' costume creator:

Our 2-year-old son, Triantafyllos is our decision maker and performer for Halloween – his dad is the idea generator and mom is the artist. We made a great team.
Last year Trian was the lion in the circus tent. This year dad has the idea for Trian to pick a main character from one of his favorite cartoons, Bob the Builder or Paw Patrol. He picked Lofty. With some talking, coaxing and a little bribery dad said – be Bob the Builder and Lofty can come with you. Trian agreed. Then dad said mom figure out a way to make a Lofty, it shouldn’t be that hard with a smile.

Bob the builder outfit is the easiest part since he already has a flannel shirt and overalls passed to us from a friend. Mom cut dad's old suspenders and sewed on a belt so that Trian's toy tools can fit in between and still be removable. The tool box was red duct taped on a 6-pack root beer package. The yellow hat was found in Dollar Tree for $1. Mom simply removed the firefighter sticker from the hat.
Next it's the difficult part, Lofty! Lofty is a crane tow truck and we decide to make the crane working (expandable arm for heavy lifting).
Materials for Lofty:
We recycled boxes as body parts and container bowls as wheels, old rope, the inside of paper towel rolls, and used a pumpkin shaped treat bucket as Lofty’s lifter (a reuse and a tie in with Halloween).
Instructions:
1. Find a box big enough to cover the step 2 wagon. Cut another smaller box open and reshape it as Lofty's head. Cut the windows on Lofty's head. Attach two paper plates as eyes. Use light blue paper for Lofty's mouth.
2. Cut a tall box open into pieces and reshape them into three different sized rectangular boxes. These boxes will be the expandable crane arm.
3. Build the take-up wheels, cable, and hook with crane arm on the body of Lofty. Materials were collected from the inside of paper towel rolls, cat tree string, and cookie box. This arm is made detachable for easy transportation on truck.
4. Spray paint Lofty. Color print Bob the Builder logo for side decor. Last we happen to have a blue chair to put between two wagon seats since they were covered by Lofty head and butt. Attach six wheels. Done!
For the whole project, we only spent $8 on two cans of blue spray paint and $1 on yellow hat. All materials were collected from our recycle bin. It took us about 5 hours to complete the costume.

We went to a local 2015 Halloween parade and won a first prize in preschool group. Everyone was impressed. Somebody even asked if mom is an engineer. For some reasons dad took credit.