Steve from Blue's Clues
by William 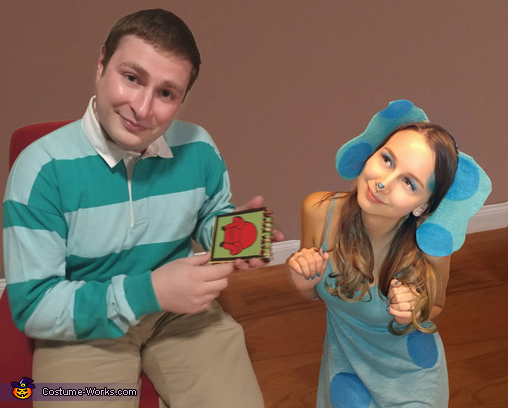 A word from Lauren, the 'Blue and Steve from Blue's Clues' costume creator:

My husband Kyle and I dressed up as Blue and Steve for a Halloween party that we attended. My favorite part of the night was hiding pawprint "clues" for him to find at the party. He then drew them in his homemade "Handy Dandy Notebook". I bought my dress for $2 at Salvation Army. The material for my ears, spots and his notebook were bought at Joanns. We already owned his kahkis, his shoes, my socks, my headband and the makeup that I used. The most expensive part of the costume was his shirt. It cost $60! But, we scowered the internet and couldn't find a cheaper alternative. We plan to sell it after to bring the total cost of this costume down to $6.