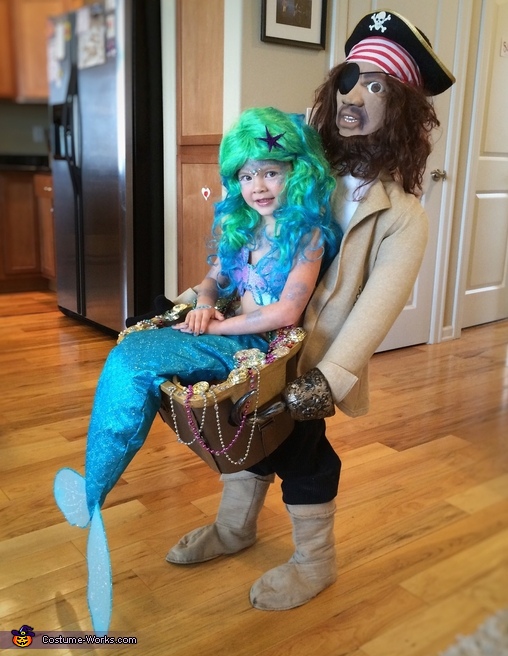 A word from Audrey, the 'Blackbeard discovers Mermaid' costume creator:

Ahoy mateys!! Look at this magical discovery that pirate Blackbeard stumble upon on his last voyage! This beautiful mythical creature (also known as my 4 yr old daughter, Sophie) was 100% handmade and created out of her want to become mermaid. I thought the idea of just a mermaid was too plain and simple, so I decided to complicate things, (because that's what I'm good at 😝), and create a pirate to hold the treasure chest she'd "sit" on. Since this was my first time making a costume like this, it did take a lot of time trying to figure out the "how to's", but it was definitely well worth it! And with all the thrift and dollar store finds, it was fairly cheap to make, I'd say under $50. And here's how I did it....

First I made the pirate. I started with small back pack and built him around that. I used a turtle neck filled with pillow stuffing, a hanger to shape his shoulders and a styrofoam wig holder for his head. I used a dowel and duck tape to secure everything stable and even. I got black pants and tan jacket from the thrift store. His hands were a black glove and plastic pirate hook I stuffed and sewed onto the jacket. His face mask had the hair already attached, so I pinned a hat and scarf on it. I pinned up the neck of the turtle neck to keep the styrofoam head base all covered and in place. And I covered the back pack straps in skin tone material to blend better against the mermaid.

Next was the treasure chest. It's a small styrofoam cooler that I trimmed the bottom off to proportion it to her size. I glued on wood like scrapbook paper and leather straps and buckles from a thrift store belt. I painted the trim gold. Then the fun part, adding the treasure! I glued bead necklaces, gold coins, and gems, (all from the dollar store) all around the chest and spilling out. I even added a container to hold her candy.

For the mermaid, I made the top out of a bandeau bra and foam paper. I cut the shell shapes out of the foam and glittered it up. Then sewed it onto the bandeau bra. I freehand cut the tail out of sparkly material, then sewed and stuffed it. I added a sequence elastic waist band that attached with velcro, just to hold it properly around her waist. Her fins are butterfly wings from the dollar store. I used the top half of the wings and sewed them into place. I found the wig at a thrift store and did sea colored makeup with glitter and gems.

Now to bring it all together....
Once her mermaid look was ready, I attached the treasure chest by cutting slits into the sides for a belt to go thru. The belt looped thru the chest and into her pants to hold it in place. Then we put on the back pack pirate. To attach his hands to chest, I used heavy duty velcro. And I also used velcro to attach the sides of his jacket to the bottom of the back pack straps to cover the "behind the scene" up a bit more. Last, I put her tail on and she was ready to go!

I took her to the mall for trick-or-treating and she was stopped every 5 steps for picture! The reactions were awesome! Some people couldn't figure out how it was done. They thought the pirate was an actual person carrying her! One store was giving out hot cocoa and was trying to give me 3....I laughed and said, "There's just two of us!"