Birds of a Feather Costume 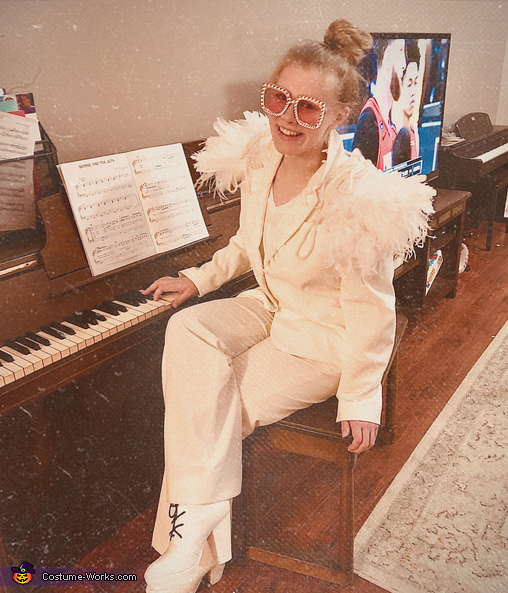 Birds of a Feather Costume

A word from Danielle, the 'Birds of a Feather' costume creator:

My name is Danielle, and I’m a HUGE fan of the singer Elton John. After I watched the movie Rocketman and saw all of the stunning costumes he wore, I instantly knew what I would be doing for the next few months. I bought the base of a white jacket from my local thrift store, but I sewed some lace to the collar of the jacket to make it stand out a little bit. After I did that I went on amazon to buy the shoulder feathers, I hand stitched some felt on top of bother of them to give them a white base. Then I hand stitched on plastic white pearls on the rim of both of the feathers. In the middle of the feathers I cut out different lengths of tan colored yarn to represent the strings on the original costume wore by Elton John, I hand stitched them through the middle of the feathers. Once I finished everything on the costume jacket, I went back to my local thrift store and found white bell bottoms and the closest thing to platform boots. When I purchased the shoes they were black, so I bought fabric paint from my local art store and did several coats of white paint on the shoes. Once I finished painting, I dunked both of the shoes in white glitter to get them sparkling just like Elton John. Once the shoes were finished I went on amazon to purchase a set of Elton John glasses and picked out the pink one’s. In total the costume costed about $50-60, with everything hand stitched. This was my first time I had ever sewn a costume after taking a sewing class in my high school last year, and I’m proud of it.