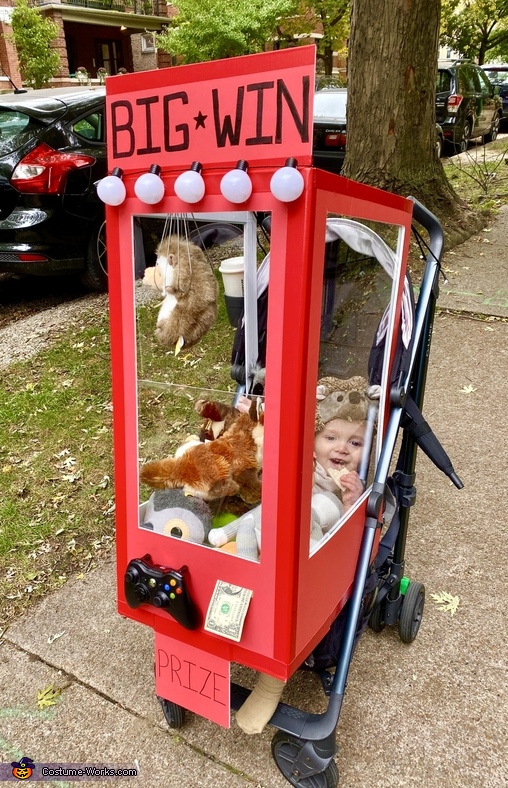 A word from Paige, the 'Big Win' costume creator:

This is Luke Maverick, in his homemade “hedgehog in claw machine” costume!

We ventured out in Chicago the weekend before Halloween and braved the rain and cold weather so we could enjoy some festivities around town, then went out for trick-or-treating during the week on a very snowy Halloween night!

What was our inspiration? We were looking for a costume where we could incorporate his stroller. It also needed to be warm and ideally block the wind as well, as the forecast was calling for snow on Halloween. We wanted to do something fun, unique, creative, and something that everyone would be able to recognize and enjoy. We wanted to bring a smile to as many faces as we could! We also wanted Luke to be comfy and cozy.

When I was growing up, we generally made our costumes. My parents were very involved in the process and helped us come up with fun and creative costumes. I wanted to follow that tradition and do the same for Luke.

First, we balanced the foam board between the pieces of his stroller, to get an idea of how we were going to make it work. We then measured and cut the foam board. We took plexiglass and used duct tape to attach the plexiglass on each side. The plexiglass ended up being very helpful in terms of blocking the wind and keeping him warm. We used a shorter piece of plexiglass for the front, so that Luke could interact with people, hear people talking to him, and so that we could pass him his sippy cup or a snack when needed. Once we duct taped the plexiglass on, we used duct tape on each side to connect the three pieces in a U shape. It had to be the exact measurements of the stroller sides so that it would form an even rectangle and not be bowed out.

We then created the top piece, using a marker to freehand draw the letters. Then we attached the lights (which was actually a light up skeleton necklace from the local drugstore). The skeletons are on the other side and I used a hot glue gun to secure the bulbs so they wouldn’t turn in and that the plain sides would be showing. We then created a piece to go across the top to secure everything. We took a couple pieces of black rope and made loops to put over the stroller handles to hold the whole costume in place and make sure it didn’t fall forward. We then took a dollar bill and taped it to the front. We used a piece of rope and a hot glue gun to secure the controller. We put a piece of clear tape over the shorter front piece of plexiglass so that the edge would be nice and smooth in case anyone touched it.

We then used wire cutters to snip the wire whisk and make it into a claw. We used hot glue to secure that to the inside of the foam board so it could hang down. We took Luke’s stuffed animals and dumped them in, and ironically we had a small hedgehog stuffed animal that matched the hedgehog costume he was in, so we used that as the animal in the claw.

We stayed up until 4:00 a.m. making the costume - but hey - the good news is that the total cost was less than $50, Luke had fun, and we were able to bring a smile to many faces!