Beetlejuice and Lydia
by Levona 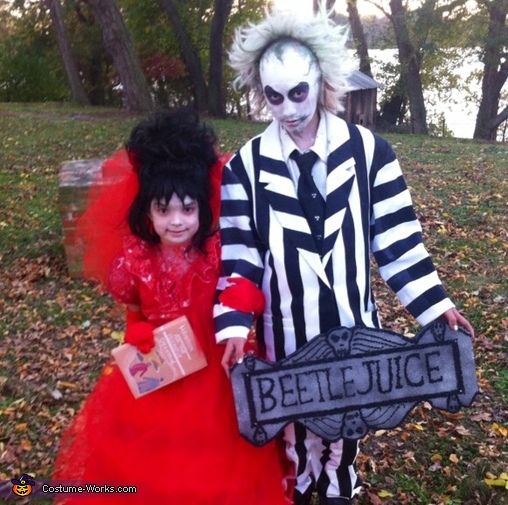 A word from Chrsitopher, the 'Beetlejuice & Lydia' costume creator:

Our two children Bella and Isa are wearing the costumes. Bella as Beetlejuice and Isa as Lydia. Our children like to make homemade costumes each year, and especially enjoy Tim Burton characters. The majority of their costumes started out as Goodwill pieces. Specifically Beetlejuice's costume started out as an all white adult's pantsuit, of which received an overall 'rot' treatment as well as many, many, hand painted black stripes all over. Bella's (Beetlejuice) wig started as a mad scientist wig of which was folded in half and glued to a bald cap where they also received 'rot' and paint jobs. Lydia's dress started as a Goodwill 'Pepto Bismol pink', adult sized, 80's, prom gown (or bad brides maid dress). It received a dye job and many, many layers of lace and tule sewn on. Additionally, she is wearing a hoop skirt made of several hula hoops under the dress. Lastly is Lydia's wig which happened to start as a long blond wig. This received hair cut, style, dye job, and then had the wedding veil of red glued to it for security. The final touch on both costumes was a fitting (as all items were originally adult sized), a rotting, and deathly touch! This couple is sure to scare in their Halloween affair!!