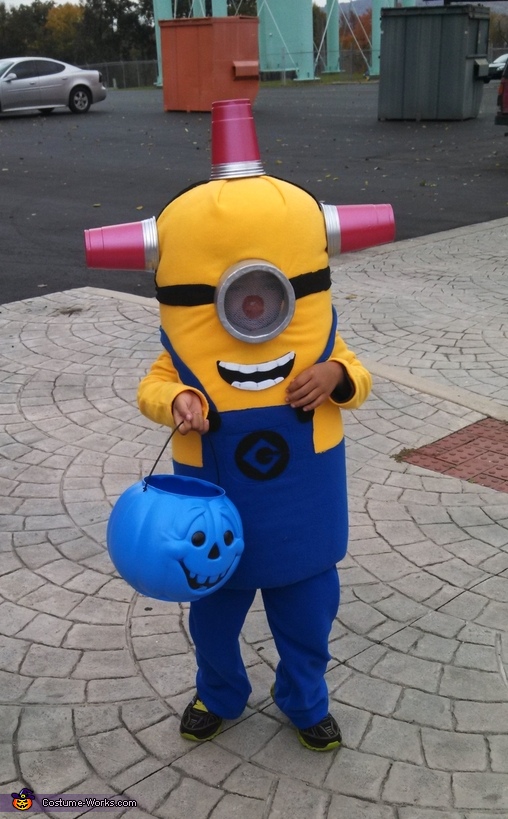 A word from Amanda, the 'Bee Do Minion' costume creator:

I made this costume for my 6 year old son. Each year I ask what he wants to be and make whatever he wants. This year he was specific and said he wanted to be the minion that goes 'bee do bee do'.
It was some work to get it done but thanks to this costume he won 3 local costume contests. Everyone seemed to love it. He was asked to pose for pictures often and you could always hear kids say 'bee do bee do' as they walked by.

Most of the tutorials for this type of costume say to use a round garbage can; my son is on the small size so we couldn't do that and used paper mache instead. It made it fit better and it was lighter and easier to wear.
I used a blow up punching bag wrapped with clear cling wrap as the base for paper mache and once that was dry I removed the bag and plastic and I had the base for my costume. I added straps from a old belt inside so that the costume could sit on the shoulders instead of being held up by the arms.
The base was covered with quilt batting to make it softer and I used fleece for the minion, clothing, straps and mouth and teeth.
The goggle is made from paper mache wrapped around Styrofoam and spray painted with metallic silver paint. Behind the goggle I used 3 layers of white tulle and to make the eye and colored it with a brown marker for the iris. My son said he could easily see out of 3 layers but it was hard to see out of 4.
The beacons are clear plastic cups painted with red metallic acrylic paint and the same silver spray paint as the goggle. They flash so in order to be able to turn the lights on and off I used a Styrofoam circle the same size as the cup and glued the led flashing light to the circle (which was glued to the costume) and then pushed the cup over it. It stayed in place and allowed me to pull it off and turn the lights on and off easily.
For the arms I made a sleeve from the yellow fleece so they would be independent from the costume, this made taking the costume on and off easier.
The pants were made from the same blue fleece and made separate for the same reason.

This costume took a few weeks to make, mainly due to the drying time of the paper mache and life. From start to finish it could be done over a weekend if worked on all day.

The total cost was under $30 for the entire costume. Around $15 for the fleece, tulle and batting, $1 for the roll of brown paper, $4 for the spray and acrylic paint, $3 for the flashing led lights, $1 for the cups, $3 for the styrofoam, and a couple of dollars for other random things that I had around the house like glue, thread, flour (for the paper mache paste) and the belt.
Almost everything that was used was ether reusable or had plenty left over from the package that could be used for something else.