Beauty and the Beast
by Jordan

Beauty and the Beast with Lumiere
by Bryan

Beauty and the Beast
by Kristin

Cogsworth and Lumiere
by Rhiannon 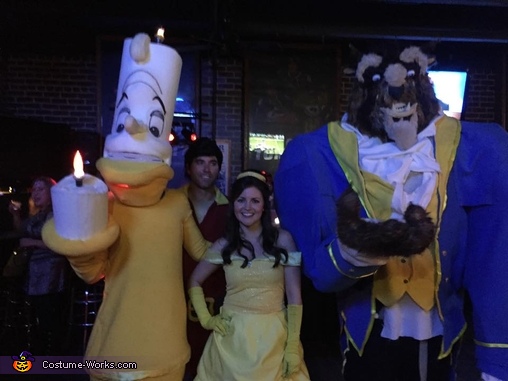 Beauty and the Beast

A word from Justin, the 'Beauty and the Beast' costume creator:

For those people who know me, I am known as the king of Halloween. I suppose the reason for that is because of my Halloween costumes. For the past nine years, I have been into making homemade costumes, each year getting bigger and better. Over the past nine years I have honed my skills as a costume maker, learning all the ways how NOT to do things. The earlier costumes were fairly simple, but uncomfortable. A few years ago I decided to go big with pac man and ghosts. Pac man was fully functional and his mouth was able to open and close in true pac man fashion. Not only did we have a moving, chomping pac man, all of his ghost enemies lit up blue. It was at this point, seeing people’s reactions; I knew I was officially hooked on Halloween. The next year brought some hard times. I was in a motorcycle accident a week before Halloween and it was a huge struggle to get the costumes finished. But to all of the efforts of the world trying to prevent me from having an awesome costume, the rockem sockem robots were born. These costumes came equipped with fully functional punching arms, and spring loaded heads that actually popped up when hit. Even though the costumes didn’t get as much love as ones in the past, they still brought back that nostalgia in everyone who played them as a kid, and that was the fun part. Last year, I went bigger and bolder with an eight and a half foot tall version of the popular Pixar movie character “Wreck it Ralph”. The hands were gigantic and it was very fun giving fist bumps to everyone walking down the street. And even though only about 60% of the people knew what the movie was, 100% loved taking a picture next to a giant. And that giant led me into this year.
As a group, we usually have an idea of what we want to attempt the next year for Halloween in January or February, and usually start construction shortly after that. This year was a little bit different and it wasn't until I met my beautiful girlfriend and a friend told me that with my beard, we were the real life beauty and the beast. From there the design and the construction were in full swing. The most difficult of making a giant costume is trying to fit a person inside with it still being functional. But I was up to the challenge and went to the near by irrigation supply store and bought about 100 feet of 1/2 inch PVC pipe and about 200 PVC fittings and headed home with a design and a prayer. After some serious trial and error, I had the completed sub structure completed. The arms were put on homemade hinge joints so they were able to move in a fluid motion, and the who thing was rested on my shoulders using some old belts as a harness. To cover the beast I called in an order to an upholstery shop and bought some foam sheets. There are some better options out there, but upholstery foam works best for the price. After covering the body with the foam, I used the left over foam to sculpt the head, the hands, and the feet of the great beast. This was my most favorite part of the costume. I didn't really have any idea what exactly I was doing, but it turned out better than I could possibly imagine. Also, I made the mouth on a slide joint so he could talk, even though I didn't use it that much. So now we had a head, some hands, and some feet on the beast and I was looking at how to make him furry. After buying some faux fur, I decided that it wasn't the way to go. So I went and bought a bunch of wigs and actually cut and glued wigs to create the fur. From there it was just covering the beast with clothes and finishing him off with the details. The finished product stood at nine feet tall, and took about 50 hours to build.

There wouldn't be a beast, if it wasn't for a belle. And I couldn't have been more excited to have a perfect girl for belle. She came in un aware of the magnitude I put into Halloween costumes, but she stepped up and she made her own dress. That's right, even the dress was homemade, even with out much experience in sewing. I know she spent some long nights and about 15 hours to create. The thing she disliked the most was the fact that she had to do her hair for multiple nights in a row.

So I have been doing costumes with the same buddies for the past few years, so we thought that these costumes will be fun with Lumiere and Gaston. Lumiere was made out of left over foam and his lights were fully functional. Gaston, we made his shirt, his belt and styled a wig the best we could. The best part about Gaston was, my buddy had to walk around in leggings.
Then it came to take them out, and this is my favorite part. We took them out to try them out the weekend right before Halloween at a local city Halloween event. And it was an instant success. This was the first time I ever took my costumes out in front of children, and it was such a great feeling. Seeing the kids faces light up as they saw me from a far, and seeing their faces turn a little uneasy as they got more near was priceless. But it was until I got down on a knee and gave the kids a hug, that I knew this costume was the real deal. It was so much fun being in pictures with little princesses, and the very best part of that day was that my niece got to walk down the street holding hands with a giant prince. The next weekend was when we got to go out amongst our peers and friends and it felt like we were famous. Over the weekend we heard "where did you buy that", "that was my favorite movie" and many other things but one thing was known, we brought people something that was a cartoon that they loved to something they could touch and hug. It was an absolutely amazing feeling and is definitely something that I can look forward to doing again next year enough!!